Another weekend gone by, and more memories of cigars smoked and beverages sipped. One of the winning pairings from the past rainy weekend was this tasty combo. 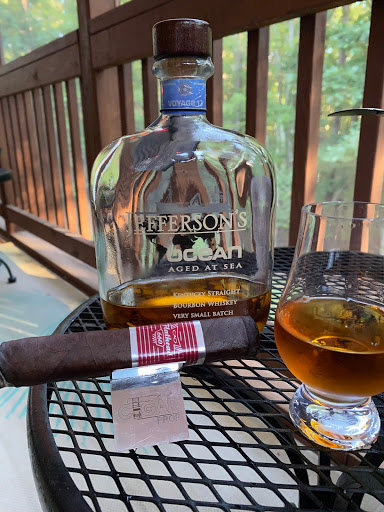 Jefferson's Ocean Aged at Sea bourbon is one I picked up a couple years ago, but eventually found itself slipping further back on the shelf. It wasn't because it was lacking in any way, I enjoyed it quite a bit, other bourbons simply took focus. (That's probably a sign of buying too many whiskies, rather than drinking too much.) Recently I dug it out and have been pairing it with different cigars. The bourbon spends six to eight years in oak barrels which are then placed on a ship to travel the ocean for another six months. The voyage is said to cross the equator 4 times with stops in 30 ports. Unsurprisingly, the turbulent ocean voyage affects the flavor of the whiskey. The resulting 90 proof bourbon is smooth and mild, with a hint of brine in the flavor.

CAO Flathead Carb 660 is a cigar that I haven't smoked in a couple years. Again, simply because there are so many other cigars to explore. The nearly black, Connecticut Broadleaf wrapper covers an Ecuadorian Connecticut binder and Nicaraguan fillers. The smoke produces rich, semi-sweet chocolate, and espresso flavors. It's a full bodied smoke that packs a bit of strength too. The large cigar offers a good two hour smoke. The stick is very sharply box-pressed, with a very flat head. Box pressed cigars sometimes exhibit an uneven burn requiring touch ups along the way. The combination of the large ring gauge and extreme box shape of the Flathead 660 always, for me, produces a burn will require some maintenance along the way. It's also somewhat of an unnatural shape to dry to draw through. Despite the drawbacks, and it's a very enjoyable smoke and one that consistently gets high reviews.

I recently picked up a 10 pack of the Flathead, and although there's very little of the Jefferson's left, there are plenty of other bottles hiding in my cabinet with which to pair the bold cigar.