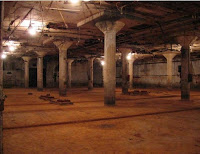 Blue and Gray Brewery sent out an email update this week on their impending move. In case you missed it, Jeff Fitzpatrick writes:

We recently cleared a big hurdle. The code of Virginia requires that sprinkler system needs to be installed in our new basement. Spotsylvania County granted our request for modification so we won't have to sprinkle. Other permits are still pending.

The Virginia Hefeweizen will be our first brew at the new facility so the Hefe won't be ready until later in June. Pub opening will be somewhat later. We are thinking about having a 4th of July celebration at our new home. Beer and fireworks, Yee-ha!

The 4th of July? Could that be another annual brewery event in the making?

Also, On Tap Magazine recently did a piece on Blue & Gray here.
Mused by David