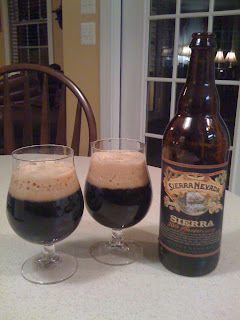 On a recent cold evening, while we contemplated the arrival of the season's first snowfall, Colleen and I broke out a bottle of Sierra Nevada 30th Anniversary - Fritz And Ken's Ale. This Imperial Stout is the result of a collaboration between Fritz Maytag and Ken Grossman, two pioneers on the American craft beer scene. Fritz And Ken's Ale is one of four limited beers Sierra Nevada did to celebrate their 30th Anniversary. The beer was released last Spring, and I've been holding on to it until just the right time.

The corked and caged bottle opened with a pop, I was glad I had a good hold on the cork. The dark chocolate and roasted malt aroma was immediately evident. A careful pour into two snifters produced a couple of inches of thick, sturdy head. The beer itself is as dark as it can be. The flavor was that of rich roasted coffee and bitter chocolate. The stout also features grassy, bitter hops that linger in the aftertaste. The mouthfeel is thick and chewy. Despite the explosive opening and copious head, the perceived carbonation was not excessive.

It's often remarked that a good beer is an experience for all the senses, and Fritz And Ken's Ale is a feast for the eyes as well as the nose and mouth. I sat for a long time enjoying the sight, smell and flavors of this beer. It really was just the drink to linger over on a cold winter evening. And that thick head? After nearly an hour, there was still a quarter inch of foam left on top.

Colleen and I thoroughly enjoyed sharing the bottle of this Sierra Nevada 30th Anniversary Ale. It was the perfect way to close the day.