It occurred to me recently that I haven't taken the shotgun to the range in a long time. When I looked through my range journal, I realized that it had been just over two years. That's simply unacceptable. Sure, the defensive shotgun is not as pleasant to shoot as the AR-15 or the pistols, and range sessions are shorter, but I was shocked that it had been so long.

So one day after work this week, I headed over to the range with the Remington 870 Express to make sure I still remembered how to handle the weapon. I started out on the shotgun field, setting up the clay target stands. I ran through the array of five targets multiple times. My aim was good but I had to work a bit on racking a new round into the chamber immediately after shooting. Soon I had regained that important rhythm. 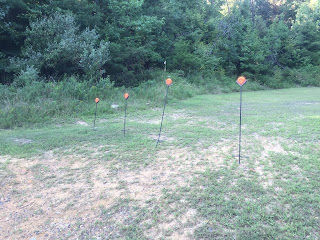 Next I moved over to the rifle range, to shoot with buckshot and slugs. Starting out at 10 yards, I shot buckshot rounds in a couple of five shot groups onto some USPSA targets. I concentrated on running the gun as fast as I could, while maintaining a good sight picture. After finishing with the buckshot, I loaded up the slugs, and moved back to 25 yards. Shooting slowly at first, the intent was getting a consistent sight picture and accurate hits. Gaining confidence, I started running the action a little faster, but still watching the front bead, with acceptable results. 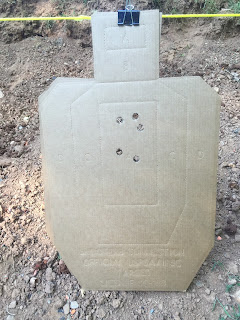 I shot for less than an hour, including cleaning up the spent shells. It was an enjoyable outing, and I felt good about getting in some overdue time with the shotgun. I also made a promise to myself that practice with this weapon will be more regular going forward.