This weekend was the final IDPA match of the year at Rivanna. It was also the annual Top 10 match where the Top 10 shooters from the year compete to determine the top shooter of the year. The Top 10 shoot as a group and the rest of us watch while they shoot through.

All four stages at this match were stages which were shot previously during the year, and they were all memorable. Stage 1 started us seated with the loaded gun and all mags on a table. Seven targets were arranged in front of us, to be shot in tactical sequence. One target was placed much further down range than the others to break up the rhythm. It was a fun fast stage, one that I completed -0. 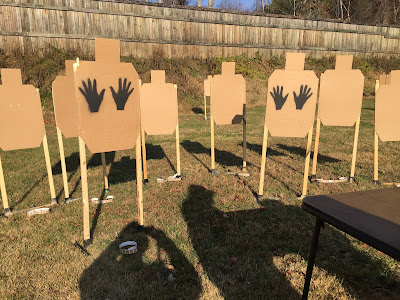 Moving on to Stage 2 we found a stage I remember well from an earlier match. There were three targets engaged while backing up. Then moving behind a wall, we dropped to a prone position and shot through a ground-level port. In that opening we found three open targets, two more targets partially blocked by a non-threat, and two steel plates placed right in front of non-threat targets. I recall shooting the plates successfully previously, which added to the pressure to repeat that feat. In the end, it all worked out, and I shot this challenging stage just -2. 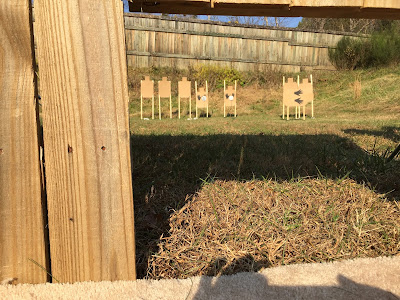 The third stage tested our shooting from behind low cover with eight targets that were all reduced by hard cover and non-threats. The targets were to be engaged in tactical sequence. After my reload I was momentarily confused as to were I left off, but picked up again without skipping a target. I was -5 on the stage, though given the tight shots was not overly disappointed. 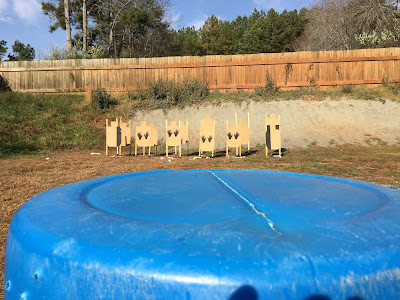 The final stage I recall from last month, when we shot it in the opposite direction. This stage started on the right side with three targets shot in tactical sequence. We them moved to the center to engage two targets from cover with two body and one head shot. These two targets were partially blocked by high non-threats, which made getting the body shots a challenge. The final left side position was another tactical sequence group of three targets. This was another -0 stage for me.

There were only 5 shooters on our squad and we moved through the stages quickly. We completed our stages before the Top 10 squad caught up to us. We never had to pause to let them shoot through, but we also didn't get to see the top guys shooting the stages.

I was very happy with how I shot a this match. My accuracy was good — no misses and no hits on non-threats — and I felt that I shot at a decent pace too. In SSP - Sharpshooter I finished first, and despite not qualifying for the Top 10 squad, managed a 7th place finish overall. The combination of interesting stages, good weather, and fun folks to shoot with, made for a great wrap to the season at Rivanna. I think I may be able to get to one more match in 2016, but if I don't, this certainly makes a great finish for the year.