It's been a couple months since I was able to get to an IDPA match, and I had expected that match to be my last of the year. However, with a fortunate combination of a clear schedule and good weather, I was very excited to be able to attend the December IDPA match the Saturday before Christmas at Cavalier.

For this match I decided to shoot my SIG P320 Compact in the CCP division. I'd recently upgraded the sights on the gun, but had yet to shoot it competitively since the sight switch.

The five stages of the match followed a holiday theme. The first stage our squad shot, called "Who's Naughty & Who's Nice?," had us seated at a table with our unloaded gun and all magazines placed in a box. Nine targets, along with a plethora a non-threats were arrayed out in front of us. Shooting the stage -0 gave me a good start to the match. 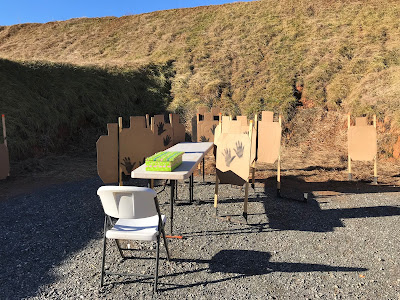 "Not Home Alone" was up next. This was a field course where we started holding a wrapped package in our support hand, while our strong had was holding a screw driver that had been stuck in a tire. After engaging an open target we moved through the course to three points of cover engaging multiple targets at each. This was another -0 stage for me.

The next stage saw us hanging Christmas lights in "Get Lit." Here we started with our hand on a stapler high in the center of a wall. It was the shooter's choice to begin with targets on either the right to left side. I started my run moving to the left. After engaging four paper targets around the left end of the wall, I moved to the right side to find a couple of falling steel poppers and two more paper targets. It was fun stage and I felt pretty good about it, until the scoring. I had dropped a shot low into hard cover for a miss, which combined with -3 and -1 targets, left me -9 for the stage.

"Crooked Tree" held an interesting target array. Seven overlapping targets, with lots of hard cover, where arranged in a tree shape. We started at the target array with a Christmas package in hand. Up range were two barrels to either side of a shooting box. All magazines were stage on one of the barrels and our gun was in a box on the other. At the start we retreated up range, retrieved our gear, and engaged the targets.

While there was partial open body area on some of the targets, most shooters opted to shoot all head shots. I did make all 14 head shots, though three hits were in the -1 area of the head, for a -3 stage score. 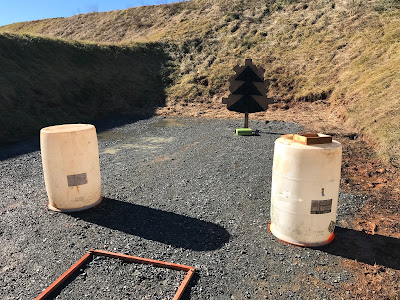 The last stage was called "Charlie B's Trees." We shot from two sides of a fenced wall. There were four targets visible from one shooting position and two more from the other. Menacingly placed barrels and pine tree branches where located around the targets obscuring any open shots. This was another challenging stage that I felt I had shot well, again until the targets were scored. I managed to shoot not one, not two, but three (!) low or wide shots into non-threats. Not a glorious finish to the match, but fun nonetheless.

Despite the poor shooting on the last stage, I finish 14th of 32 shooters, and 2nd of 4 in CCP. I enjoyed shooting the Compact gun. The 8 round per magazine limit offered a new challenge, a led to at least one miscount in my stage planning.

In a switch from the wet and cold weather we've experienced in the past weeks, the day of the match saw sun and temps in the mid-50º range despite a constant breeze. It was an extremely enjoyable morning of shooting. The stages were creative, challenging, and most importantly, quite fun. The unexpected day of shooting to finish off the year was a most welcome treat.

More pictures of the stages are here.