I was stuck in the ICU for the College Football playoff game this year. Being restricted to a "cardiac diet," I was limited in my game-time snack options. However, I planned ahead and stashed some "sides" from previous meals. Fortunately I was allowed potato chips with my lunch. (Interestingly, I was not allowed to order them with dinner.) 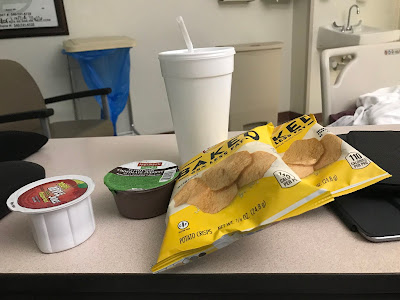 Besides the chip rule, there were a few other things I quickly learned in order to manipulate more satisfactory meals. I was allowed only decaffeinated coffee, but could have all the caffeinated tea, hot or cold, I desired. So it was iced tea for every meal. Surprisingly those teas came with copious packs of sugar, which I didn't use. However, I did desire pepper for my food. I found our early that pepper was a separate menu item — if you didn't specifically order it, you didn't get it.

I realized the other day, the last red meat I've eaten was with the hamburger meals I was served, twice, in the hospital. I'm overdue for some quality cow.

I could have used binoculars to get a better view of that game... 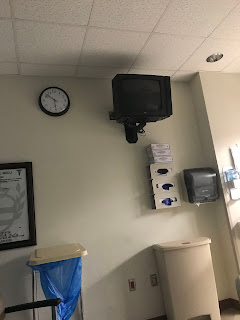