I almost forgot this blog existed. Not really, I just took a long break. I've also been quite inactive in the shooting sports. After some seven months off from any range time, I finally made it to an IDPA match a couple weeks ago. The occasion was the monthly gathering at the Cavalier Rifle and Pistol Club. That long absence was attributable to family activity conflicts, bad weather, and giving myself some "down time." 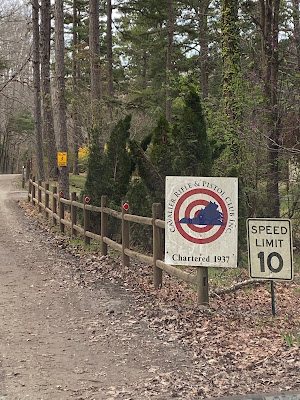 It was unfortunate that some of my friends and usual shooting companions were away at another match that weekend, but I did enjoy seeing many others. The day started off cool and breezy, and essentially stayed that way with only brief instances when the sun broke through the clouds.
For this match I decided to shoot my full size SIG P320 rather than the Compact version I had shot all the previous year. As I prepared for the match, I realized not only had I not shot anything since August 2021, I had not shot this particular gun since November 2020! This could be interesting.
The first stage our squad shot started us seated and then moving to engage targets through two center ports and around walls on either side of the course of fire. As I did my walkthrough I got an uncomfortable feeling that I wasn't confident on my very first shots through the high and narrow port. Once I began shooting, it felt good and I finished the stage just one point down. 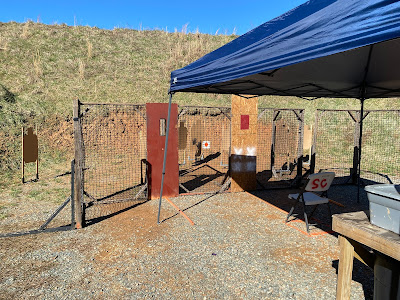 We shot the next stage while seated. There were targets to either side, and four targets partially obstructed by barrels or non-threats. The stage was a lot of fun to shoot. Despite the tight shots to targets behind the barrels, I shot the stage -0. Alas, I also received a 3 point PE for failing in my attempt to count to 10, thereby loading an extra round in a magazine. 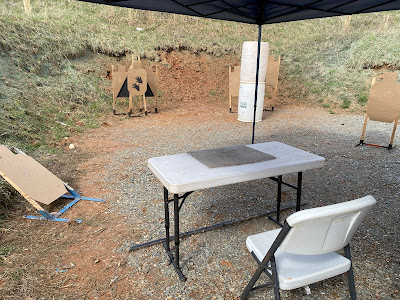 Up next was another field course with targets engaged from multiple points of cover. The stage started with the unloaded gun and all magazines placed on a table. After picking up the needed loading devices and the gun, we moved up range to engage targets on either side of the course. Then moving down range, the rest of the targets were shot as they appeared. This was again another -0 stage. 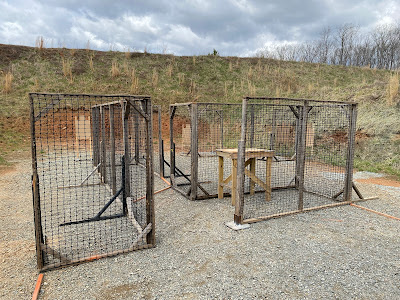 Rounding the corner to the next bay, I was not surprised to find falling steel set up. This bay is typically set up with steel and/or long shots. We began the stage with just 2 rounds loaded in the gun and standing behind two barrels. After engaging one low target to the side, we reloaded and dropped to a kneeling position, then taking aim on the distant steel, followed by two paper targets. The steel was placed at around 20 yards. The two paper targets were about five yards beyond and had the bottom sections removed so they sat low to the ground. It was impossible to see the hits on the target from the shooting line. (I could barely see the targets!) I was pleased to approach the end of the bay and find I had another -0 run. 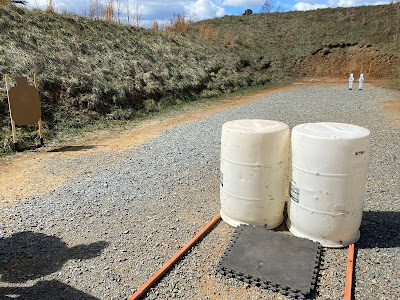 The day ended with another run around walls and hard leans around cover. After engaging three target in the open from behind a fence, we backed up to shoot from cover. Then there was a choice of directions to finish the course. Most shooters opted to cross the course, engage the target on right side, then come left to shoot at the final cover position. I knew I would be reloading while moving between those last two points of cover, so opted to take the sharp turn around the barrels then move right. I shot this one -0 as well. 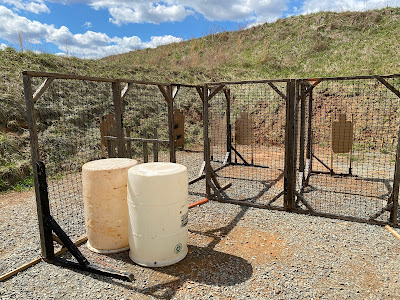 Despite my initial nervousness over my long absence, I ended up very pleased with the results. The PE added a bit of frustration, especially after the single point lost in the scoring overall. I finished 3 of 11 in the SSP division. Interestingly the top two "young guys" led the pack by a wide gap, finishing 22-25 or more seconds ahead of the rest of us.
It was a truly fun morning and felt great to get back to the range. Hopefully, it won't be quite so long before the next outing.
Mused by David