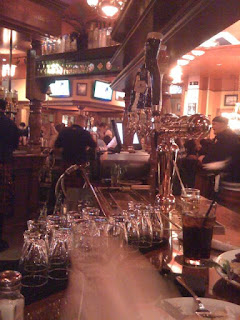 The Fredericksburg Pub opened at the Spotsylvania Town Centre in January, but I had been unable to visit until recently. I finally was able to do so this weekend. When our party arrived was prime time - Friday evening at about 7:00pm and there was quite a crowd present so we opted to take seats at the bar instead of waiting for a table. The massive bar sits mid-restaurant and has seating around the perimeter. We were immediately greeted and offered a beer menu, and told that if we had questions about a beer we were welcome to a free sample. The beer menu lists about two dozen beers. Bass, Boddingtons, Guinness, Fullers, Hoegaarden, Smithwick's, Young's, Bluegrass Brewing, Dogfish Head were among the breweries represented. There was also a bottle list that I did not peruse this evening. I noted that there was a listing for a rotating selection on cask, pulled from a beer engine, or hand pump. The current selection is from Bluegrass Brewing Company in Kentucky, and was described by the server as "a double-hopped IPA."

After first trying a sample of the BBC cask ale, I ordered and received the beer in a 10 ounce snifter. Citrus hops dominated but I found the flavor well-balanced. Carbonation was light, and it was served "cellar temperature." This was a high-alcohol beer and I savored it for quite a while.

I didn't order any food this evening, however my companions did. The fish and chips platter that Jerry ordered looked very appetizing. He informed me it was very tasty and I look forward to trying it out for myself soon. Another group at the bar ordered a platter of the house-made potato "chips" covered in a wonderfully smelling barbeque sauce. The food menu lists other English pub fare such as bangers and mash and shepherd's pie.

We sat at the bar for a couple of hours and never felt ignored. The bar was well-staffed and the servers were very prompt and friendly. I didn't see anyone waiting with an empty glass unless by choice. The staff is well-versed on the beers and were often heard making suggestions to patrons. The bar also offers a tasting flight of five beers of the patron's selection if one is really stumped.

The Fredericksburg Pub serves most of their beers in the proper brewery-logo glassware. Twenty ounce "pints" are the norm, although you can also order 10 ounce servings. The pub pours a selection of black and tans, and from my vantage point at the bar, it appeared that the black and tans were quite popular. The pub has some beers on nitrogen taps as well. I saw both Boddington's Pub Ale and Guiness served with nitrogen cascades of foam.

The Fredericksburg Pub is described as an "authentic English pub." While there are bound to be certain concessions for the American audience, the draft selection, proper pours, the dark wood and brass decor, and pub fare make for a fun atmosphere. The male servers wear kilts, and the female servers wear very short, mini-kilts. I'm not sure how "authentic" that is, but the establishment does have an English pub feel to it. It's also family-friendly, and there were quite a few families enjoying dinner in a non-smoking atmosphere. Good beer, tasty food, friendly and knowledgeable staff; that's a good reason for a repeat, and more extended, visit in the near future.