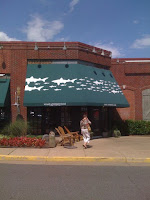 This weekend I finally had the opportunity to visit the Dogfish Head Alehouse in Falls Church, VA. Our party arrived at the restaurant mid-afternoon Sunday, and had the place almost to ourselves. We were promptly greeted, but needed some time to decide on our selections as most of the year-round, along with seasonal and special DFH releases, are available. I've previously had, or have easy access to, most of the Dogfish lineup, but had never had the 75 Minute IPA. This is said to be a blend of the 60 and 90 Minutes IPAs. I understand it is only available at the DFH restaurants or the brewpub, so it seemed my logical choice. 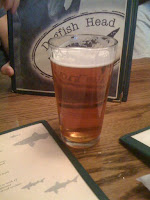 I was very happy with my choice. I fact, I was surprised just how good was, perhaps being a bit skeptical beforehand about this blended beer. The beer poured a golden amber with a small head. The aroma was mild but the flavor was quite enjoyable. There's a bit more hoppiness than one finds in the 60 Minute IPA, but it's not as bitter as the 90 Minute, which is one of my favorite Dogfish beers. A friend who was with us is very particular (yea, that's the word) about beer and there are limited beers he enjoys. (Our running joke is that the beer has to be "seasonal and expensive".) He was enjoying a Dogfish Aprihop but tried a bit of the 75 Minute and declared "that's good." I neglected to ask if the 75 Minute is mixed from the tap or if it is kegged already blended. But that gives me a reason to go back for more research. I had a taste of Colleen's Aprihop and found the draft version to be a bit more balanced, with a milder, less sweet flavor than I recall from the bottled version.
Everyone in our party subscribes to the idea of three basic food groups; "meat", "potatoes", and of course, "meat and potatoes". As such we all opted for burger and fries for our late lunch. While we waited, we shared a plate of Alehouse Wings. Wow, these suckers were hot. Both heat hot from the cooking, and spicy hot as well. Must be a ploy to sell more beer! Our son finished off the platter asking "Anyone want the last wing?" Of course, he gave us little time to reply! My Portobello Gorgonzola Burger arrived promptly and was accompanied by a side of fries. The burgers were quite tasty, with just a hint of wood grill smokiness underneath the portobello and gorgonzola toppings. The fries were a hit as well. The thin cut fries were cooked to a crispy crunchy outside. We debated whether or not there was some sort of additional coating on the fries.

There were other stops on our agenda that afternoon, or I could have easily stayed longer and enjoyed more of the Dogfish Head draft selections. I look forward to returning the next time I am in Northern Virginia.

BTW, while in Northern Virginia, I stopped in at Norm's Beer & Wine in Vienna to pick up a few bottles of Clipper City Big DIPA. I'm told that Norm's is one of the few stores in NoVa to get this limited release. I look forward to trying it out and sharing that review with you in the near future.
Update, August 22: That Big DIPA review is here.