No Tattoo, Just A Whip 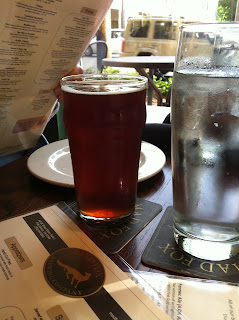 Yesterday we headed up to Northern Virginia to pick up a friend, with plans to attend the Twilight Tattoo at Ft. McNair in D.C.  No sooner did we get up to NoVa did we learn that the event had been cancelled due to weather. Oh well, there's only one thing left to do; head to Mad Fox Brewing Company for food and drink!

It was actually good timing as I had read on Mad Fox's Facebook page that they had just tapped the Orange Whip IPA the day before. I really wanted to try this one. I ordered my drink right away. My dining partners were undecided so they decided after a few sips from my glass. Colleen also opted for the Orange Whip. My cider-loving friend saw Original Sin Cider on the menu and decided to finally get to try that one.

Orange Whip is a dark copper color with a thin off-white head. Citrus aroma with bit of fruits give a hint of the taste to come. I found the flavor to be a nice blend of citrus and bitter hopping. A mildly sweet, bready malt holds everything together. Orange, pineapple, grapefruit; it's all in there in a delightfully enjoyable beer. This probably ranks as one of the best IPA's I've had. It went quite well with the Frickles, and the Buffalo wings, and the Mad Fox Burger.

Of course, I wanted another, and another. But I also wanted to try the Defender American Pale Ale, available on cask only. The Pale Ale was served cellar temp, and had a nice creamy head. A good balance of malt and bitter hops made for another tasty beer. I enjoyed this one too, but after the Orange Whip my flavor receptors were spoiled!

While we were still disappointed in not getting to enjoy the concert, the unexpected trip to Mad Fox was ample compensation.