This past weekend saw avid shooters from around the East Coast at the Nevco Targets VA/MD Sectional Championship Match, held right here in Fredericksburg. I've been looking forward to the match for several months. The stage layouts looked challenging. It was also the largest match I've shot in a single day; 9 stages, 250+ rounds, all completed before lunch.

The match was challenging indeed. It took me a couple of stages to get "calmed down" and reign in the nerves and shoot at my own speed. After that, the sights were more visible and my shooting improved.

As expected, the match was full of learning experiences. Stage 6, appropriately named "Respect," included moving targets made visible by hits on other targets. The time delay from hitting the activator until the target appeared left me waiting for the target, shooting some other targets while waiting would have been a better plan of attack. Also in this stage was a dreaded Texas Star, to be shot through a low port while kneeling or crouching. Interestingly, I had my highest finish on this stage, despite some extra shots needed to knock all the plates from the spinning Texas Star.

A few of the stages were "memory stages." Rather than simply moving through the stage and shooting targets as you get to them, there are targets that could be engaged from more than one position. The shooter has to make a plan, stick to the plan, and not waste time shooting the same target again, or worse, skipping a target altogether. During the course of the match I managed to make both mistakes. However, in doing so, I learned a few things that will help me improve in the future.

On aptly named, "Hold the door", shooters pushed open doors and held them open with a foot while engaging targets on the other side. This added to the challenge, especially since the two spring-loaded doors where hinged on opposite sides. "106 Miles to Chicago" required the competitor to drop to knee, engage targets under a low port, and then finish the stage shooting targets while retreating up range.

Overall, I was happy with my performance in my second major match. It certainly was a learning experience, I was pushed with new challenges, and made some new friends. And most importantly, it was fun! 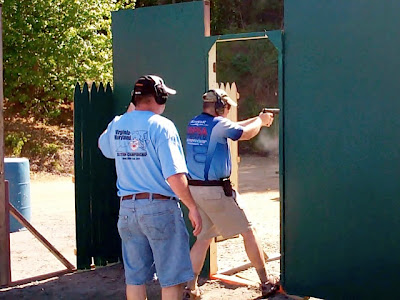