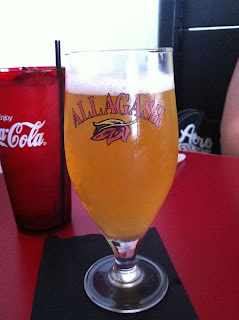 Sometimes beer distribution patterns can be frustrating. Readers of these Musings will know that I have a fondness for Clipper City beer (Yea, I know they are called Heavy Seas now, but old habits die hard.) Unfortunately, the beer from this Baltimore brewery, is hard to come by in Fredericksburg of late. I've been told "it's the distributer." The reason is irrelevant, what matters is the beers aren't here. Imagine my delight when I walk into Chip's Beer & Wine in Kill Devil Hills, North Carolina, and I see on the end cap bottles of Heavy Seas Letter of Marque! Then, later in our trip, we're at a local grocery store and spy an entire display of Loose Cannon Hop3 Ale. Not just in stock, but featured!
And the welcome sightings weren't limited to Heavy Seas. Colleen is a fan of Allagash White. We get other Allagash Brewing beers in Fredericksburg, but for some reason this particular one is hard to come by. We've even asked for it in places known for extensive beer selections and have been disappointed. But there it was, on the shelf at Chip's. Of course we picked up some to bring home. Later in our trip, we stopped in for dinner at the Lucky 12 Tavern and they had Allagash White on draft, served in a logo glass as well. A nice surprise indeed.

When we visit North Carolina I make it a point to look for beers that I can't get back home. Typically those are local North Carolina beers. But sometimes we find beers from other regions that just aren't available to us. That's what makes traveling fun.