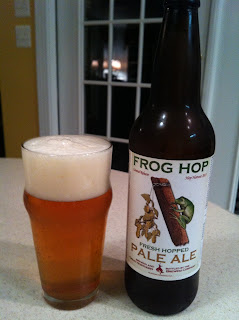 One of the joys of writing these Musings is that I occasionally get to try out craft beers from other parts of the country, beers that I probably wouldn't have to chance to otherwise. This is one of those times. A few weeks ago I received a package from the Great Northern Brewing Company in Whitefish, Montana. Exciting stuff, we have family in Montana and I've visited Whitefish in the past, though not Great Northern Brewing.

Frog Hop Fresh Hopped Pale Ale is brewed once a year, in just a single batch. The beer makes use of locally-grown Mount Hood, Chinook, Nugget and Cascade hops. For this year's batch the brewery did something different, and I think very exciting. They invited the folks in the surrounding Flathead Valley to bring in their own home-grown hops. The locals traded their hops for beer! Frog Hop really is a community beer.

Frog Hop pours a golden-orange color with a fluffy white head. Lots of sticky lacing is left behind on the glass as one enjoys the beer. The aroma is grainy with a mild citrus note. The citrusy hop flavors are subtle and well-balanced with the mildly sweet grain of the malt. The finish is dry with some lingering bitterness. While I was expecting more green fresh hop flavors, I wasn't disappointed. The brewers made use of local, fresh picked hops, and created a nicely balanced beer without being "in your face" with the hops.

As I noted at the start, I can't buy this beer around here. Great Northern beers are distributed in six western states, and I suspect Frog Hop is even more limited in availability. I'm certainly interested in trying some of the brewery's other beers. The next time I get the chance the visit the beautiful Flathead Valley of Montana I will seek them out.

*FTC Notice: I drank and reviewed this beer of my own free will. No compensation was received for the review.