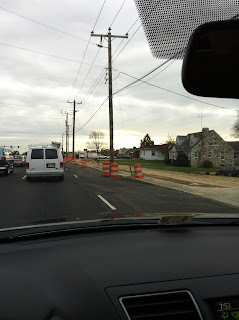 The main thoroughfare in town is undergoing a much needed widening project. The project is funded by the American Recovery and Reinvestment Act of 2009, otherwise known as "The Stimulus." The process of widening this road speaks volumes about government projects.

Now this week, crews have arrived to put in new utility poles and one would assume, remove the old ones. Then crews will need to come back and finish building the curbing and filling in the paving.
One wonders how many tax dollars could have been saved by moving the utility poles first. But then again, the purpose of the Stimulus Act was to spend tax dollars, in any way possible.