Friday evening we headed out for dinner at Park Lane Tavern. I had decided on a malty Scotch Ale when our server let us know the evening's cask selection was Starr Hill Cryptical. I initially could not remember what style that represented, nor could the server. However, by the time she returned with a sample, I had looked it up (yea, smart phones) and had made my decision. Imperial Stout. Served on cask. Yea, that's just the ticket to go with our Fish & Chip entrées.

We were taken by surprise when the beers arrived. They was served in larger than expected, two-hands needed, snifters. The Cryptical Imperial Stout is pure black with a moderate beige head. As the glass is emptied, a very sticky lacing is left behind. The aroma is faint, mostly roasted malt and mild coffee, with some floral hop notes. Dark roasted malt, bitter chocolate and earthy hops make up the taste profile. A hint of citrus comes through in the finish, but the roasted, bitter malts linger as the mainstay in the dry finish

Served from cask, the beer was low in carbonation and served at just the right temperature. There was no need to wait for the beer to warm to release the rich flavors. We enjoyed sipping on our beers during dinner, and while lingering long after we had finished eating. 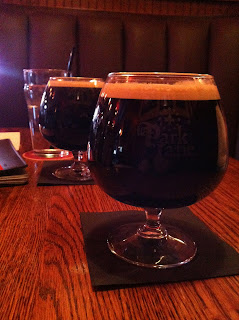