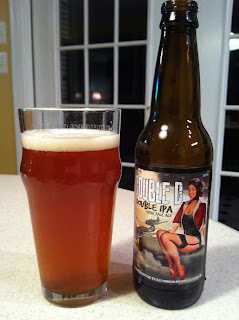 Originally a one-time release, Double D IPA is the latest addition to the year-round list of beers from Old Dominion Brewing. The promotional package I received recently also included another beer in the brewery's "pinup" series, Morning Glory Espresso Stout, as well as a sample of Cherry Blossom Lager. It should be no surprise to regular readers that I opted to try out the IPA first. I look forward to sharing my experience with the other two beers in the near future.

A fairly robust pour builds a small, but persistent head over the dark orange beer. Copious creamy lacing is left in the glass. The aroma is sweet malt, grass and a hint of alcohol. The flavor profile combines a sweet malt base, with grapefruit pith and resiny pine. The sweet malt predominates and overtakes the citrus notes at the end, leaving an astringent and sweet finish. The 9% ABV provides some warmth. The overall impression tends towards a mild Barleywine, though in my mind, there is a blurry line between a Double IPA and a Barleywine Style Ale.

The artwork for both the Double D and Morning Glory packaging is based on the WWII practice whereby a pilot would embellish the nose of his airplane with a very personal piece of art. Though often frowned upon by the upper echelon, these paintings were intended to inspire and motivate with their provocative nature. Also in the package I received were two 17" x 11" heavy paper posters of the artwork for Double D and Morning Glory. They'll make nice additions to the breweriana corner in the basement.

Bottles of Double D IPA are showing up on store shelves now. And, in good news for craft beer fans in Ohio and Michigan, your states are included in the Old Dominion distribution range.