Last month I attended the monthly IDPA match at Sanner's Lake for the first time and had a blast. Even though it means spending a total of about four hours on the road, it's a fun match and I was excited to go back. I rendezvoused with a friend at about the halfway point of the trip and we rode to the match together. It was happy to share the ride with another shooter. Stuart's company and the interesting conversation made for a fun trip.

The first stage for our squad had us seated, facing six targets, most partially obscured by barrels and/or non-threats. It required some hard leans from the chair to complete the course of fire; many shooters ending up with two legs of the chair up in the air. The next stage was also shot while seated, this time with a non-threat directly in front of the shooter blocking the targets. 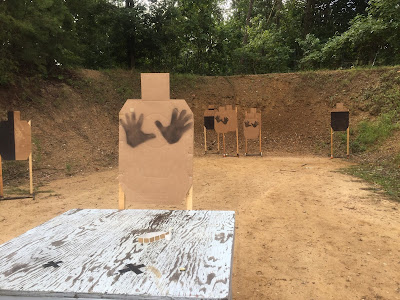 Moving on, a standards stage presented a unique challenge. There were four targets, each requiring two body and one head shot, and all shooting was to be done weak had only. The targets were set at just seven yards, but only one was fully in the open. As can be seen from the photo posted below, the non-threat targets were taking a beating. I didn't hit either of the "good guys" on this stage, but did miss one head shot. 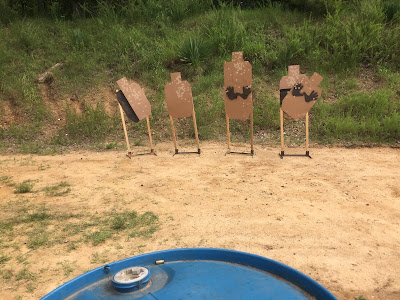 The next stage combined a few close but partial targets, with falling steel and paper out at 25 yards. Adding to the challenge, two of the distant steel targets were set in front of a non-threat target, and the paper target was also behind a non-threat target.

Our fifth stage reminded me of a classic USPSA stage with barrels hiding targets on either side of the bay. However unlike USPSA, we had to be conscious of cover. The path chosen while moving downrange — staying to the left or right, moving down the center, crossing back and forth — affected the order in which we were exposed to the targets. One had to pay close attention to cover while shooting the stage. I think I reverted to a USPSA mindset and ran past one head shot target way too fast, missing the target completely. That cost me 20 points and several places in the overall finish.

The last stage started with fast shots on an arm's length target, transitioned to more distant targets and a steel activated swinger, then concluded with a sprint to a final up close and low target hidden behind some barrels. It was a fun fast stage, and the only one I shot clean, to finish the match on a high note.

I found this to be a very challenging match. All paper targets in the match required three hits, and all but a few of them were partial or head shot only targets. I never really got into the groove, and had more than a few misses. Leaving the match I wasn't expecting to finish well. But after seeing the scores, I wasn't as disappointed as I thought I'd be. I could have done better, but at least it was not the disaster I had imagined.

The match was a lot of fun, well-run and went very quickly. The facility is large enough that each stage is in it's own bay, which allows the match to flow with little or no waiting between stages. We finished all six stages in less than three hours and the summer heat didn't really become a factor until the last two stages. Adding to the fun, at Stuart's suggestion we made a brief stop at a local liquor store on the way home where I picked up a couple beers I can't find in Virginia. I'm looking forward to enjoying them in the coming days.

Sanner's Lake has been improving and adding shooting pits over the past year. The bay pictured above wasn't even there last month. I'm looking forward to shooting more matches at the club in the future.