A couple weeks ago I was contacted by Ammo To Go, asking if I'd be interested in doing an ammo review. They offered to send some Winchester USA Forged ammo, a product with which I was not familiar. Checking out the description online, I learned this was a new steel-cased ammo with conventional brass jacketed lead core (FMJ) bullets, that is intended to be a budget option for shooters.

This also put me in a quandary. I haven't and don't shoot steel cased ammo. The Tula/Wolf steel ammo we typically see is Russian-made and of dubious quality in my opinion, and that of others as well. (I also recycle my brass casings to help with the shooting budget.) However, the Winchester ammo is American-made, from a respected company, and made with what seem to be quality components. And this offer from Ammo To Go was cost-free way to learn about it. 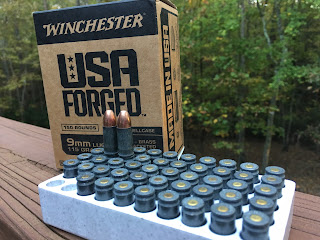 Ammo To Go sent along 300 rounds of 115 grain 9mm USA Forged ammo, and they included a few boxes of the familiar Winchester "White Box" 9mm for comparison. Colleen and I took the ammo out to the range over the weekend to try it out. We brought along a variety guns in which to trial the ammo; a SIG Sauer P226, a SIG Sauer P239, and the Smith & Wesson Shield.

The first thing we noticed, while loading magazines, was that the coating on the steel cases rubs off quite readily, and our fingers we coated in black in short order. I believe this to be typical of steel-cased ammo. I've loaded some dirty "traditional" ammo in the past, but this exceeded anything in my prior experience. When being cleaned later, the guns seemed extra dirty, but the cleaning was no more difficult than that done after any range outing.

But our real interest was in the shooting. We started out by firing a magazine's worth out of each weapon, simply to see how the ammo fired. Since we experienced no failures or malfunctions of any type, we loaded up more magazines and started shooting our typical range routines. We did most of the shooting from about seven yards, and could see no variation from the groups we typically experience in practice. Shooting into an IDPA target from 15 yards gave me 7 hits in the -0 zone, with three just outside -- again about par for me.

I shot some of the White Box ammo to see if I noticed any difference between the two. I had an impression in my mind that the USA Forged ammo was ever so slightly softer shooting. However, when I loaded a magazine with alternating rounds, I was hard pressed to note any difference in either recoil or accuracy.

We did not use a chronograph, shoot from a rest, or into ballistic gel or phone books for this review. Our intent was to shoot like we would at any range outing, and note our experiences. Other than the dirt on our hands, this outing no different than any other. The Winchester USA Forged ammo shot reliably and without any issues. I prefer a heavier bullet for competition, but this is a perfectly acceptable option for practice and "recreational" shooting. Searching for the steel cases in the range gravel was a bit of a challenge admittedly.

As I am sure most will agree, ammunition supplies will likely become more restricted and more expensive in the near future. Because of that I regularly purchase ammo in bulk, to stock the secret bunker, and as a hedge towards future issues. With that regular purchase routine, fluctuations in prices and stock are very apparent to me. As such I keep a watchful eye for options and price breaks, and have list of manufacturers and suppliers I check regularly. Although perhaps not my first pick, in a shortage I'd be willing to purchase the Winchester USA Forged ammo in order to keep my own "stash" full. Options are good to have, especially if you don't mind cleaning your guns.


Notice: The ammo reviewed in this post was provided at no charge by Ammo to Go. The content of the review was written with no compensation or influence from them or Winchester. The only benefit derived by the writer was a fun afternoon at the range with his wife.