I'm no fan of winter, especially the shorter days. But even before winter arrives, the range days are even shorter. For reasons known only to those who make the rules, the range closes at 4:00PM once Daylight Savings Time ends. This despite the fact that, today for example, sunset is not until 5:03, with last light at 5:31 —plenty of time to shoot.

It's been two weeks since I made it out to the range, so to help make up for that, I decided to shoot the air soft gun for a bit. Setting up a target in the back yard, I looked to see how visible I was to the neighbors. Fortunately, there are still plenty of leaves on the trees to keep me hidden, for now. 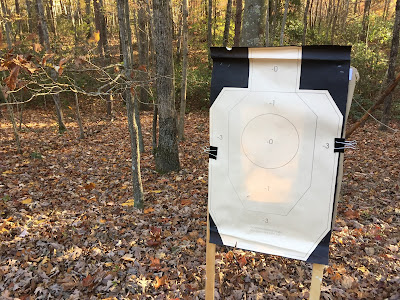 I practiced from various distances in the yard, shooting while moving for most of the time. I noticed that the holes the BBs made in the paper closed up and were near impossible to see. At least that matches my shooting with the real gun, since I can't make out the bullet holes out past 7-10 yards anyway. Interestingly, I did note the difference in the sound made when the hits where in the center of the paper, where the cardboard backer was open, and the sound made when they hit cardboard too. That gave me some feedback on how I was doing.

Shooting the airsoft gun is enjoyable, though not nearly as fun as shooting the real thing, but it's something to do. Given the restrictive range hours, and shorter days, I suspect it'll make up much of my practice in the coming months. Maybe I'll even try some low-light shooting soon.