Are The Church's New Cardinals Armed?

On June 26, Pope Francis created five new Cardinals in the Church. The Vatican sent out a press release with the news.


At 16.00 today, in the Vatican Basilica, the Holy Father Francis held an Ordinary Public Consistory for the creation of five new cardinals, for the imposition of the berretta, the consignment of the ring and the assignment of the title or diaconate.

The celebration began with the greeting, oration and reading of a passage from the Gospel according to Mark (10: 32-45). The Pope then pronounced his homily.

The Holy Father then read the formula for the creation of cardinals and solemnly pronounced the names of the new cardinals, announcing the presbyteral or diaconal order. The rite continued with the profession of faith of the new cardinals before the people of God and the oath of fidelity and obedience to Pope Francis and his successors.

The new cardinals, following their order of creation, kneeled before the Holy Father, who imposed upon them the cardinals’ zucchetto and the berretta, consigned the ring and assigned to each one a church of Rome as a sign of participation in the Pope’s pastoral care for the city.

After the consignment of the Bull of the creation of cardinals and the assignment of the title or diaconate, the Holy Father Francis exchanged an embrace of peace with each new cardinal.

This momentous event would have been even more remarkable if the Pope really was assigning the Italian handguns to each Cardinal. Unfortunately, what the writer meant to say was "biretta."

Reminds me of this, unrelated picture... 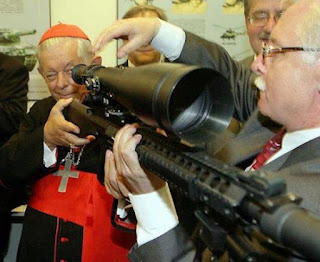