The alarm sounded way too early on Saturday morning. Even the coffee maker was not awake yet as I prepared to head to the 2017 Commonwealth Cup at the Rivanna Rod & Gun Club. Before I started shooting IDPA regularly, I knew about "the Cup" and I've been looking forward to shooting this match for some time. The organizers took a hiatus from holding the Tier 2 event for a few years, but the match returned in 2017.

The ten stage match was extremely well organized, and although we shot all day, we moved smoothly from stage to stage, with few backups. There were two indoor stages and we were transported across the club grounds in a shuttle bus for those stages. Each squad had a "squad mom" who made sure we knew where to go next and who was due to shoot, and who coordinated with the stage SO's. There was a delicious lunch catered by Mission BBQ. To ensure everyone stayed hydrated a dedicated club member spent the day delivering cold water to the stages for shooters and staff. As the day wore on, the sight of the golf cart carry the coolers full of bottled water became more and more welcome. Simply put, the organizers did a remarkable job of making this a fun event for all.

I regards to my own shooting, I had to digest the match for a few days before doing this post. As regular readers (both of you) may have noticed, I'd been preparing for the event for the last few months. Starting with a good performance at the Maryland State IDPA match in May, I was hoping for a great finish to the year. As it turned out, it was not to be the finale I had hoped. I made more than a few mistakes, and did not shoot as consistently as I had expected.

Despite my scores, I found every one of the stages to be a fun, challenging and interesting to shoot. Some I did well on, on others quite poorly. There were a number of stages that especially stood out to me. I've also posted some photos from the match here.

The match started with the same "warm up" stage shot by all competitors. Three targets getting two hits each, followed by a reload and a head shot on each. I finished in a respectable 7.01 seconds with zero down. Now that the jitters were gone, our squad started on Stage 8, "Park Bench." Sitting on a bench, we engaged two targets, before moving on to a hanging bridge. Carefully making our way across the shaky platform, four more targets were to be found. This was probably my favorite stage of the day, and I shot it well with just one point down. 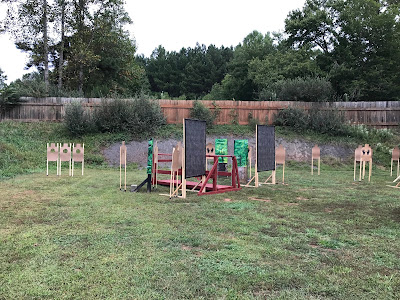 After shooting our first three stages, we hopped on the shuttle bus for the ride to the clubhouse and the two indoor courses of fire. "Night at the Club" was probably the most talked about stage in the match, and not always in a fond way. This "low light" course presented a disco setting, complete with moving colored lights, and lighted fault lines. There were nine threat targets to be shot from three shooting positions, with non-threats interspersed to create some tight shots.

This was a great concept for stage. The low light with distracting disco lights added to the challenge. However, as it was set up, I found there was simply too little available light. With my poor eyesight, I could not see the far right target at the end of the hallway, the first of a group of three shot from the last shooting position. I could not make it out during the walkthrough and even walked down range to get a better look to better gauge the placement. Younger eyes probably had less of an issue. By a basic rule of gun safety, "be sure of your target," I should not have shot that target. However, following IDPA rules, I was required to engage it or be assessed a penalty, in addition to the misses. I indeed had two misses on that target, as well as two hits on the nearby non-threat. Two hits on other non-threats made for a extremely poor showing.

The funny thing is, as I was packing for the match I thought, “There will be indoor stages, I bet they’ll have a dark stage. I’ll pack a flashlight.” Unfortunately, the use of a flashlight was not permitted.

Everyone I talked to liked the concept of the stage, if not their scores. I actually hope the club reuses the concept in the future, making it a flashlight stage. I personally would like to get a few more opportunities to shoot with a flashlight. A low light stage would be an interesting challenge, as much as I’d struggle. At the end of the day, the stage was challenged and ultimately thrown out. Even though it was my worse stage of the day, dropping it from the match did little to save my day.

After lunch we shot the much talked about standards stage. Three targets placed at 45 yards, requiring two shots on each, a reload, and two more shots on each. No makeup shots allowed. My goal was "hits on paper," of which I had just 8 of 12.


Another challenging stage,"Very Tight," is one we've shot variations of in past matches at Rivanna. Seated at a table, with the gun and reloads on the table, we engaged two rows of targets, nine in total, fronted by non-threats. Heads shots were mostly required for the front row, and lots of leaning for the back. I recall being happy with my shots on previous runs, not so on this day.

"Everything Moving" involved several moving targets. From the starting position there were two static targets and an up-down target activated by a stomp box. One the stationary targets had a falling popper behind it that activated swingers further down the course. At the next position we faced a swinger target moving behind a non-threat. That was followed by a target swinging behind two non-threats at the next position, and the course ended with three stationary targets behind cover. This was another stage I especially enjoyed shooting.

After executing a good few runs to start my match, the middle four stages were extremely frustrating for me. I just was not shooting well, and already knew this would probably be my worse match finish in a long time. I admittedly struggled to be motivated for my remaining runs. I was however, able to finish strong on the final two stages.

"Pick a Path" was a complex stage with 18 targets each requiring a single hit. For most folks, hitting all the targets required moving to six different shooting positions. A couple of the targets required hard leans or stretches to engage the threats through windows. I found it a fun stage, finishing just 2 points down. 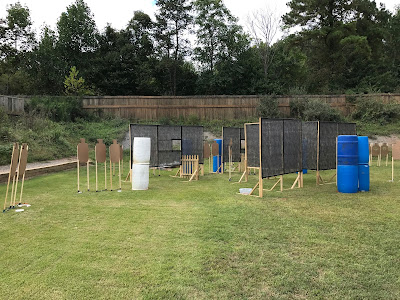 The last stage, "Out of Gas" had us starting holding a gas can in our strong hand, while facing up range. After turning and dropping the can, which I was surprised to find weighted and full of water, we engaged two targets while backing up. Next there were targets to be engaged from cover, around barrels and through two vehicles. Many of the shots were tight and only the head areas of the targets exposed. I shot it well, just 2 point down, although that included a few make up shots on a couple of the targets. 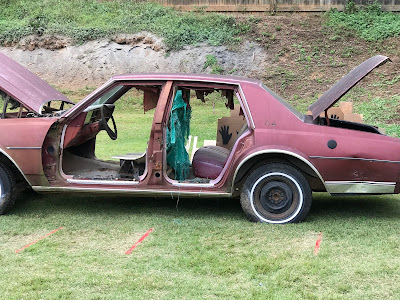 We finished hooting the 10 stages around 6:00PM. I shed my gear and relaxed for a bit while the scores were posted. There were several guns to be raffled off so I stuck around for the drawings. Alas, I was not a winner in that event either. There was large prize table for random drawings as well, with some nice prizes. Unfortunately, I found I simply could not stay any longer. I was very tired, and feared that if too much of my drive home was done after dark, it would be dangerous, so I decided to forgo any chances for swag and headed home. Once I got home and cleaned up, I had just enough enough energy left to scoop a bowl of ice cream and carry it to the couch. I was beat.

After a few days of thinking about the match, to include more than a little moaning to my patient wife, the disappointment admittedly still lingers. I shot three good stages, followed by four poor runs, before ending with three decent runs. While I was happy with the five or six stages I shot well, when I did poorly on a stage, I tanked it to the extreme. The sting of the disappointment somewhat clouds the memory of what really was an exceptional match. I typically examine each of my match performances and pick out some specific things to work on in the future — whether it's speed of shooting, movement, draw stroke, etc. This time there seems to be nothing specific, which is most frustrating.

My opportunities to shoot will likely be limited for the next few months, especially competitively. Eventually, I'll get back to the range, pull the trigger some more, put in some dry fire, and try again. There's always next year.