Last Wednesday evening Harry's Alehouse held a Wing & Beer Pairing. This was the first beer dinner event we've been able to get to at Harry's and it sounded like one we'd very much enjoy; four chicken wing selections paired with four beers.

We arrived late for the start of the dinner, and the diners were close to finishing the second course. (We misunderstood the starting time.) Both the manager and the owner stopped what they were doing and got use seated and made sure the kitchen prepared the missed pairings for us, and we were caught up in no time. We very much appreciated the extra effort and attention.

The first course featured Thai Sticky Wings paired with Allagash White. The three wings were moderately spicy but the Witbier cut right through that and refreshed the pallet. True to the description, the wings were oozing with a very messy and sticky sauce. Fortunately Harry's provided plenty of napkins and wet wipes too! 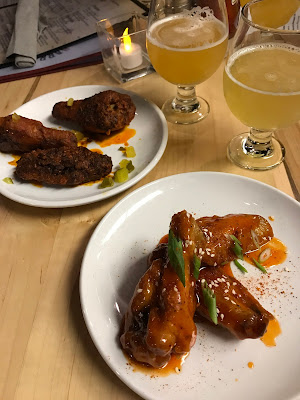 The heat was turned up for the third course of Korean Hot Wings served with Perennial Artisan Keith's Korner. The Wings were smothered in a thick, deep red, and hot, sauce that created a bit of perspiration on the top of my head. Pickled radishes were served on the side. The IPA could not quite overcome the intense flavor of the wings, and its flavor was somewhat lost. Although the pairing didn't work as well as the others, the wing flavoring was very well done. 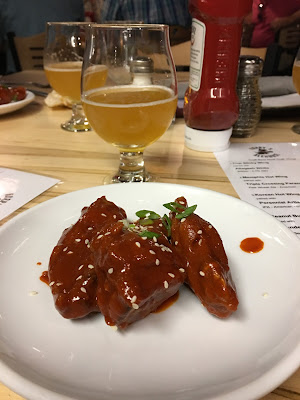 The final beer of the evening, Founders Nitro Rubaeus, was paired with Peanut Butter and Jelly Wings. Admittedly, I had my doubts about this one. The wings had a strawberry glaze and were accompanied with a peanut butter dipping sauce. The wings were flavorful, but my least favorite of the evening. The beer, to my surprise and delight was very good. I haven't been a big fan of fruit beers but the raspberry flavored beer made for a refreshingly fruity dessert finish.

Harry's Wing and Beer event made for an enjoyable evening. I found it to be a nice twist from the usual "beer dinner." The pairings were well done, and both the wing and beer selections were tasty.

Although the twelve Wings and all the beer was more than satisfying, we were enjoying ourselves so much that we decided to linger for another beer and more food. Since I missed getting the full flavor the Perennial Artisan Keith's Korner IPA, I opted for a glass of that one with my "second" dinner.

We're looking forward to enjoying more events such as this at Harry's Alehouse.