The introductory course paired Old Chub Scotch Ale with Crispy Pork Belly. Old Chub is a long-time favorite of mine, but I honestly can't recall if I've ever had pork belly as a main dish. This pairing was met with some trepidation by those at our table. A hefty portion of pork belly was topped by extremely crisp strips of rind. The beer went extremely well and served to keep the palate clean of the somewhat greasy meat. As far as that initial trepidation went, I finished every last speck of food from my plate. 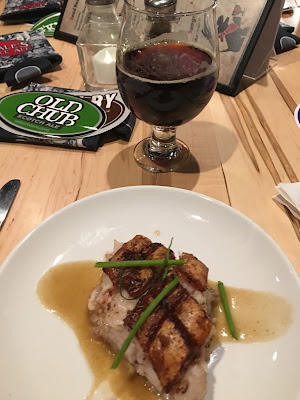 Next up was a Mulled Granny Smith Apple Salad served with Dale's Pale Ale. The salad consisted of baby arugula, frisee, pepitas, cranberries, and goat cheese with an apple cider vinaigrette. This was an interesting dish, with strong sharp flavors. The potent tang of the cheese and dressing especially were moderated by the citrusy hops of the beer, a foil that we deemed was well needed. 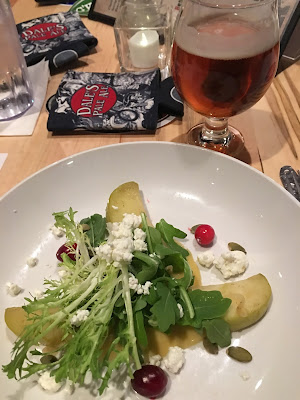 After those satisfying preparatory courses, it was now time for the "main course," Ten Fidy Braised Short Ribs. The tender pieces of beef were prepared with, and served with Ten Fidy Imperial Stout. The entrée included celery root puree, brussel sprouts and pomegranate seeds. The short ribs were melt-in-your-mouth tender. The Oskar Blues Ten Fidy served as a fitting compliment to the meal. Although once an elusive beer on the east coast, it's one of my favorite Imperial Stouts. 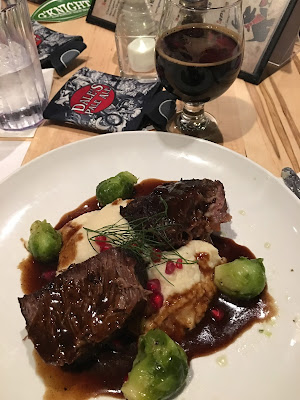 After three filling courses, the dessert dish was now upon us. We were served a large slice of Chocolate Coconut Stout Cake. The sweet treat was topped with vanilla icing and toasted coconut flakes, and paired with Death By Coconut Irish Porter. When the plate was set in front of me I remarked that this just might be too much for even me to consume. In the end however, I was up to the task and left nary a crumb on the plate or nor a drop in my glass. So often I find these dark chocolate pastries to be too dry or too sweet for my taste. Not so this evening, the cake was moist and delightfully flavored. The beer was also a new one for me. Although I do like coconut, I find coconut stouts and porters to be enjoyable in only small amounts. This pairing however, work quite nicely and was a royal finish to a great meal. We enjoyed the both the beers and the foods featured in the dinner very much. As noted previously, our dining companions did not drink beer. They were however quite knowledgeable about food, and also regarding local restaurants. They shared their experiences and we shared our beer experiences. It was a delightful evening of excellent food and drink, as well as conversation.

This was Harry's third beer dinner event, and the second one that we have attended. Harry's does these events well, and we'll definitely be on the look out for announcements of future dinners.