Finally, a match when it wasn't raining! For the first time this year, it was not raining on match day. Sure, it was only in the mid-30's when we started shooting but at least there was no mud or bagged targets to deal with. The early morning drive had me looking into the sun a lot, but that was a good omen. The morning was cool and breezy; I kept my gloves on and jacket zipped when not shooting.

The opening stage had 6 targets to be shot from behind a fenced wall. Target priority required some movement back and forth to engage all the the targets. I was two points down, for my highest stage finish of the match. 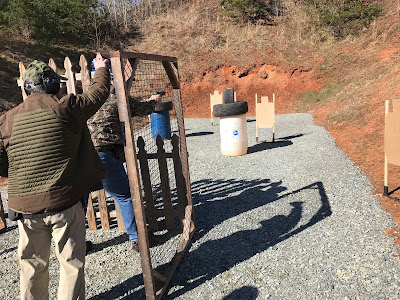 On stage 2 we started facing up range at an "ATM machine" which, for most shooters, required a turn and draw to the weak side to engage to open targets. Progressing down range there were more paper targets and two steel poppers to be found. I may have pushed just little too hard on this run, for three points down.

Approaching the next stage we saw a dizzying array of fault lines and walls around three targets and a swinging non-threat. "Pay attention" was the warning at the start of the stage briefing. The stage consisted of two strings. For the first string, we pulled a stick on a rope that activated the non-threat that swung behind two close targets. We pulled the rope, shifted to the left to shoot the first target, then a shift to the right to hit an open target, then a final shift to another close target. The challenge was the fast swinging non-threat moving behind the first and third targets. Quite a few shooters shot too late or too soon and earned the HNT penalty. 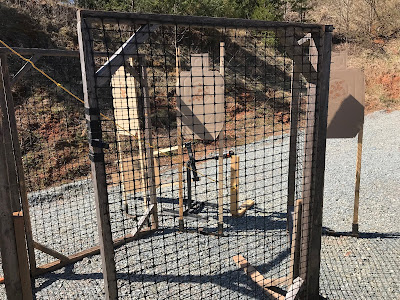 In an interesting twist, we started the second string with the gun in whatever condition it was after the final shot of that first string. Your reloads for the final four targets depended on how many shots were used previously.

I was pleased to hear I was just two points down at the end, but then it was realized that the time for my first string had not been recorded, so I would shoot the entire stage over. I really didn't mind, as it meant more opportunity to shoot. My only concern was making sure I once again missed that swinging NT target. I was successful on my second run, beating the swinger despite taking a chance at a third shot on one of the targets.

The final stage featured a long hallway with lots of side hallways to run in to to find targets. We started seated, with the loaded gun and all magazines on a table. After picking up the gun and engaging two close targets, we grabbed our magazines and moved to make a couple of long shots on two steel poppers. Picking up magazines and putting them into the belt pouches quickly is something I have not practiced much (yet.) Carefully reversing up range to engage a long open target, we then moved down the "hallway" diverting off to side halls to find other targets, finishing at the end of the hallway on two hard targets requiring significant leans around cover. It was at this final shooting position that I hit a non-threat target, adding a penalty to my -3 run. 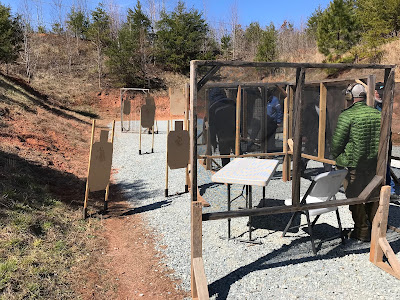 After shooting accurately but slowly at recent matches, I was consciously trying to shoot a little faster this time. I ended up with more points down (nine) than I really liked, not to mention the one HNT penalty. Still when I left the match, I felt pretty good about my shooting. Despite the penalty and points down, I ended up 14th of 41 overall, but still managed 1st of nine in my division and classification (SSP SS.)

The match provided a great mix of fast shooting and accurate shooting. Even the "hoser" stages required careful planning and shooting, lest you ended up missing a target or tagging a "good guy." It was a fun morning of shooting with good people. Contrary the insinuations of leftist media of late, and despite the presence of numerous guns, there was no spontaneous outbreak of "gun violence."

And as I said at the start, no rain!

A few more pics from the match posted here.