It was so nice to enjoy a bit of warmth while I smoked on Friday evening, I decided to return to the lounge on Saturday. The morning was spent on chores around the house until mid-afternoon. I briefly considered heading to the back deck to relax but then remembered that the lounge would have a warm wood stove going. Truthfully, I did have an ulterior motive as well. I recalled from the previous evening that the shop had the newly released Black Label Trading Company Morphine 2020 Vintage on hand. That was a smoke I was wanting to try out. 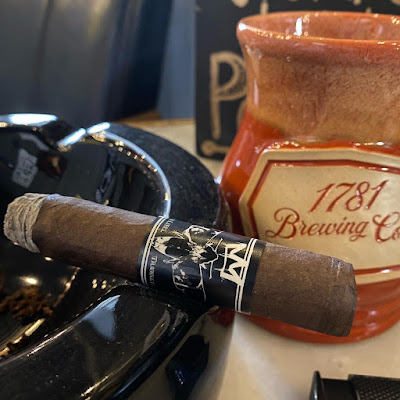 The 2020 version of Morphine features unusual dual Mexican San Andrés and Ecuador Maduro wrappers. The San Andrés wrapper alone was enough to tempt me, but the combination was especially intriguing. Interestingly, the BLTC Bishops Blend, which ranks as one of my top cigars of 2020, features an Ecuadoran Maduro wrapper.
I selected a 4½ x 50 Robusto to enjoy. The humidor also held some lancero versions of the stick. I opted to make a switch from my usual beer preferences, and order a 1781 Appalach Farmhouse Lager. This is a very popular beer from the brewery, though I don't recall that I've had it previously.
The beer had a grassy aroma and a pleasing, crisp grain flavor. It made for a refreshing afternoon libation. The Morphine sports an oily, dark wrapper. The stick had a dense feel to it when I cut it, but the draw was fine. One of the first things I noticed was the copious volume of smoke being put off. The flavor was full bodied and had notes of raisons, chocolate and coffee. There was a deep, but not overpowering spiciness that lingered in the finish. After just a few puffs, I started wishing the stick was a bit bigger.
The milder flavored beer and the bold cigar paired amazingly well together. If there was a downside, it was that I only had time for the small cigar and a single beer. After 45 minutes by the wood stove, both were finished and I headed home. I did grab a Morphine in Lancero on the way out for future enjoyment.