Finally Got in Some Shooting

Two months. That's how long my range bag has been sitting untouched. Between family commitments, weather, and socialistic restrictions on freedom, opportunities to hit the range have been limited. In addition, I've been somewhat reluctant to dig into my ammo stash, given I don't expect the availability (and cost) to return to "normal" levels for at least two years. That said, I was excited to be heading to the Cavalier Rod and Gun Club for the monthly IDPA match on Saturday morning.

After a night of fitful sleep, due to excitement and some nervousness, I arrived at the range to greet friends and marvel at the sunny, warm morning. I also soon lamented dressing for slightly cooler weather. But it was time to shoot! 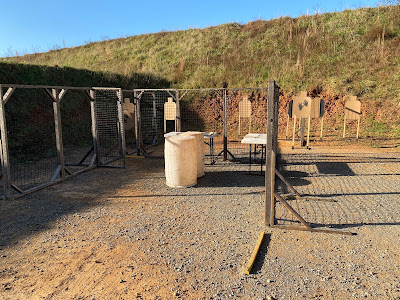 The first stage our squad shot had us staging the unloaded gun on a table, and all the magazines on another nearby table. After retrieving and loading the gun, there were three targets to be engaged around a wall and two more from either side of the stage after moving up range. This was my "shake off the dust"stage as I finished 5 points down. 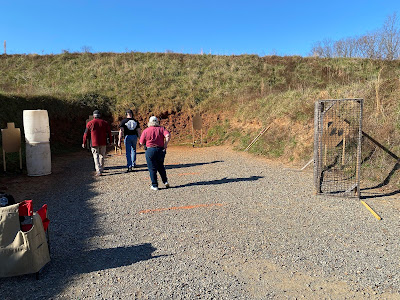 The next stage was an unusual "open field" course with an odd start. Our gun was left on a table, loaded with just one round. Magazines were also on the table. There was a target directly in front of us, another off to the right that required a step or two backwards to engage, and as we continued backing up, two more targets appeared behind barriers. All targets required 2 hits each, except the last, which was a head shot only target requiring a single hit. Yep, start with one round, but it was the last target that required only one shot minimum.
I shot the first three targets on the move while retreating. My path drifted to the left a bit causing me to take some extra steps to get to the fourth target, though I did shoot the course -0. 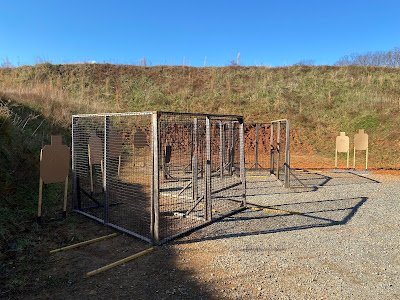 Following that we moved to our first "normal," draw from the holster stage. The course of fire began with a close target that was shot from retention. Turning, we engaged two distant targets from cover before beginning down a winding path to finish the course. The remaining targets were generally shot while leaning around tight cover. Again, a -0 zero stage for me. 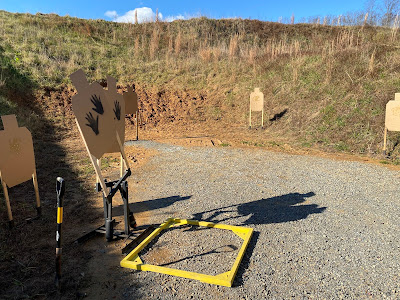 As we rounded the bend to the next bay, the first thing I noticed was a double swinger with two non-threat targets. It was soon realized that the swinger was immobile, but that didn't make it any less "in the way." The whole stage was shot from the box and started with us leaning leftward to hold the shovel handle. The target hidden behind the non-threat mass could be engaged low and from the right. Three open targets were then shot in priority. All targets required three hits minimum.
My shooting on this stage felt really good. Transitions snapped to the targets and the sights were set quickly. The stage also went by in a blur. When it was all done, I was -0 on what was to be my best stage of the day, coming in 2nd in SSP and 7th Overall for the stage.
The final stage of the morning continued the uniqueness of the stages shot thus far. We began seated at a table, the unloaded gun in a box, and magazines placed about the table per the shooter's preference. Shooting did not have to be done while seated. Directly to the front were three partial targets. To either side, obscured by barrels, were targets that only became visible when moving to the opposite sides of the table. Additional targets were found be retreating up range and shooting around walls on either side. 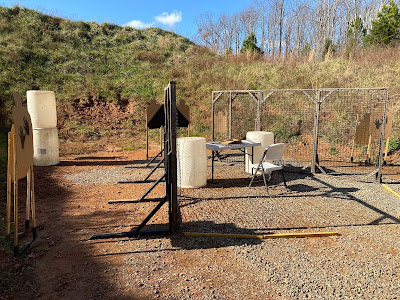 There were numerous paths that shooters took around the stage to engage all targets. My path started by stepping to the left, grabbing a magazine left on that side of the table, and engaging the three center and far right targets. Moving to the right end of the table, I engaged the far left target, then grabbing a magazine from that end of the table, reloading, and backing down the wall to get the outside target, finishing at the opposite wall and last target. Other shooters opted to circle the course, starting and ending at opposite ends of the table. Stages that offer many options are always fun to shoot and observe. Alas, I was -3 for the stage.
The Cavalier match on this warm November morning offered a welcome chance to visit with friends, and to get in a little range time. Though the round count was relatively low, the unique and interesting stages were a blast. It also shows that fun shooting doesn't rely on high round count. I felt really good about my shooting, although my placement of 21st of 31 Overall, and 12th of 23 in SSP would make one think otherwise. That finish, combined with a total of just 8 points down for the match, likely indicates to a general slowness of movement and shooting. Something I could probably improve on with a return to regular dry fire practice.
Nonetheless, it was a beautiful morning, an extremely fun match, and a treat to see friends. And for that I couldn't be more thankful.
Mused by David
Email ThisBlogThis!Share to TwitterShare to FacebookShare to Pinterest