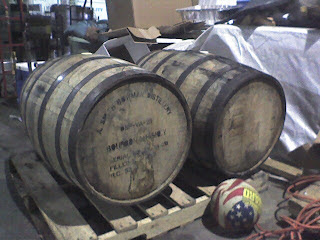 In a recent newsletter, Jeff Fitzpatrick of Blue & Gray Brewing announced that they have been aging about 100 gallons of Temporary Insanity Imperial Stout in oak bourbon barrels for the last 4 months. The barrels were from the neighboring Smith Bowman Distillery. The brewery is asking newsletter subscribers to vote on a name for the limited release beer. Voting ends Thursday, after which they'll need to have the new label approved by Virginia ABC in order to sell the beer. Jeff says that could take from one to eight weeks.

Today I had the chance to have a preview of this beer. The beer pours a dark cola-brown with a light beige head which persists as a thin ring. I reviewed the Temporary Insanity Imperial Stout a few months ago and this bourbon barrel aged version has a distinctive flavor from the original. The aroma is noticeably that of sweet bourbon. There's a hint of chocolate malt as well. The aging has smoothed out the flavor and there is little of the hop bitterness of the original. The flavor of the whiskey is prominent. Roasted malt and dark chocolate notes are detected. There's a warming alcohol presence as well. I don't know the actual ABV, but my estimate it's on the higher side, maybe close to 10-12%. The aftertaste adds a slight hop bitterness.

Thanks to Jeff for the opportunity to review this yet-unnamed beer. I found it very easy to drink, and it will be a nice fit for the cool Virginia evenings still in store this season. When the oak aged Insanity Stout is ready for sale, don't delay getting in line. I for one will be anxiously awaiting the release.