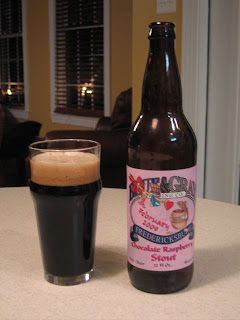 Chocolate Raspberry Stout is Blue & Gray Brewing's contribution to the Valentine's Day celebration. Doesn't every holiday deserve a beer? The label shows Cupid bearing a raspberry and chocolate-laden arrow. I wouldn't want to offend Cupid by drinking this alone, so Colleen and I shared a bottle recently on a cool Winter evening.

Blue & Gray Chocolate Raspberry Stout is a perfectly opaque, black beer. The thick mocha-brown head builds quickly and rapidly drops. There's a faint berry-like fruit in the aroma, along with a hint of dark chocolate. The raspberry flavors come out stronger in the taste. Initially they are nearly masked by the bitter espresso flavors. As the beer warms the sweet fruit comes on stronger but the dominant flavor remains espresso and dark chocolate. The finish is lingering, and exhibits a good balance between sweet fruit and bitterness. The mouthfeel is thick and highly carbonated.

I'm not a big fruit-beer fan and I struggled a bit with the berry aroma and flavors. Although not the same as a typical fruit beer, the raspberry flavors detracted from my enjoyment of the beer. I am reminded of dark chocolate candy flavored with fruit juice. For my tastes, chocolate should not be adulterated with other flavors. (And don't even get me started about mint chocolate ice cream.) But that's me, this is a popular beer for Blue & Gray. In fact, when I first went by the brewery to pick up the beer, the first bottling run was sold out and I had to go back later in order to pick up a few bottles. If you are local to Fredericksburg, the brewery will even deliver a "beer gram" with Chocolate Raspberry Stout to your Valentine in time for the holiday.

Blue & Gray Chocolate Raspberry Stout is usually available through February so you still have time to try it for yourself.