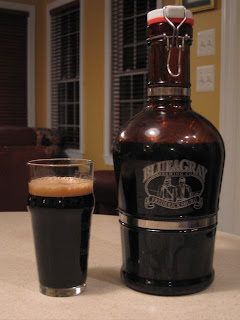 Stonewall's Reserve Stout is a very limited release from Blue & Gray Brewing Company. This special flavor was created by aging the brewery's Stonewall Stout in oak bourbon barrels. Barrel aging seems to be all the rage now, and I've tasted mixed results from plenty of breweries. However, I make it a point to try any new releases from Fredericksburg's hometown brewery so I picked up a growler when the beer was released last Friday. (BTW, now that Old Dominion is moving to Delaware, Blue & Gray could be considered Northern Virginia's hometown brewery.)

I served the beer to a group of friends we had at the house Sunday evening. The beer pours jet black with a thin brown head. Upon seeing the beer, the exclamations ranged from "ooh" to "eew". However, folks were soon commenting that it's "lighter" than it looks. The bourbon aroma is noticeable but not overwhelming. The aroma is balanced with some espresso notes. The taste follows suit. There are dark chocolate and espresso flavors along with the bourbon flavors imparted by the barrel aging. Mild bourbon and espresso bitterness linger in the aftertaste.

The Stonewall's Reserve Stout was a hit. The folks who tried it have beer preferences that run from hops to dark to macro-lager, and everyone enjoyed it. Simply put, this is a very nice beer. Only four kegs of the initial batch were made so if you want to try it, get over to the brewery soon. I spoke to Jeff at Blue & Gray today and he said the beer is proving very popular and he expects it will be gone by this weekend. Availability is via growler fills only. The good news is another batch is in the works and is expected to be ready around May 1.

Blue & Gray is experimenting with some of their other regular beers in order to create other "Reserve" releases. Besides barrel aging, the brewery will using dry hopping in upcoming beers. I'll be watching for more special beers from them soon.