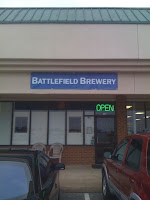 Fredericksburg's first brew pub is now officially open, and serving beer made on premise. Battlefield Brewing Company is located in The Pub, a long-standing and popular stop for good pub food. To help celebrate the brewery's grand opening on Friday, my family had dinner there and tried out a couple of the new beers. The brewery is currently serving three beers; Chancellor Pale Ale, Iwo Jima Irish Red, and Wilderness Wheat.

My selection for the evening was the Chancellor Pale Ale, brewed with Centennial and Amarillo hops. The Amarillo hops balance the citrus notes with just a bit of bitterness. This creates a crisp, moderately hoppy beer. I found it quite enjoyable, and it should satisfy the hop-head, as well as less adventurous beer drinkers. Colleen ordered the Iwo Jima Irish Red. This selection has a strong malt backbone with a bitter finish. From my casual observation, Iwo Jima Irish Red looked to be the most popular beer during the evening. We did not try the Wilderness Wheat, that will be a mission for another visit.

Both of the beers we had during the evening were very well done. Head brewer Lyle Brown, along with the rest of the brewers, have done an excellent job. Lyle has said that he plans to expand the breweries offerings with seasonal beers, and also let the brewers create special one-off beers in the future. That is something to look forward to. Coming up in a few weeks, Belleau Wood, a Belgian-style ale, will be available as well.

The Pub is a popular eatery, known for it's good pub grub. I am especially found of the burgers, and the fish & chips there. Now that good craft beer is being brewed onsite, it gets even better. Right now the only drawback is the smokiness of The Pub. With the new restaurant ban on smoking coming into play next month, that situation should improve.

Meanwhile, despite the smoke, I expect I'll be a frequent patron of Battlefield Brewing at The Pub. It is now the closest pub to my home, and the only one serving fresh-brewed beer.

For those keeping count, Fredericksburg now boasts TWO craft breweries. Blue & Gray Brewing also has plans to add a pub in the future.

A few pictures from Battlefield Brewing Company are here.