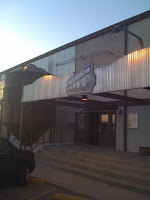 Craft beer fans in the Denver, Colorado area have a new pub to enjoy. Former Flying Dog employee Chris Rippe opened Rackhouse Pub last week, and it appears to be a hit. I was fortunate to be in Denver last week and my plans included an extended stop at this new pub.

The beer selection at Rackhouse is well thought out and offers much variety. And it's not just craft beer fans being targeted. Even the typical factory beer fan will find a craft beer to enjoy. During my visit Chris was busy introducing factory beer drinkers to craft beer. The bartender who watched over me that evening, Lisa, was very knowledgeable about the beers, and the whiskey. I was also introduced to Stranahan's Colorado Whiskey. I've not tried much whiskey in the past, but I certainly understand why some folks enjoy it so much. This may be a subject to explore further in the future.

Rackhouse is not just about beer and whiskey, there's great food too! On Chris' recommendation, I had the "blacks." Listed as an appetizer, this is a meal in itself. Spiced sausage and mussels prepared with beer and herbs, served with a side of flat bread. The mussels were very tasty and I used the bread to sop up the broth left at the bottom of the bowl. The food menu features a wide selection of pub fare including salads, chili, burgers, and sandwiches.

If I found one negative about Rackhouse Pub it's that it requires a four-hour plane flight for me to visit. You folks in Denver aren't so encumbered. There's a new pub in town, and it's sure to be a hit. Fine, local beer and whiskey, good food, served in a friendly and comfortable setting. It's been just a week since they opened, and they're still awaiting some supplies and tweaking procedures, but already locals are finding a new "favorite pub." I will definitely be back.

Rackhouse Pub is located at 208 South Kalamath St. in Denver.
You can visit them online here.
Follow @RackhousePub on Twitter.