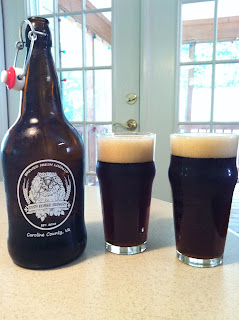 We picked up this growler at Rusty Beaver last week, and finally had the chance to open it up on Sunday. Even after years of success, I am always a bit apprehensive when opening a new growler after it's been sitting in the fridge for a week, or more. I need not have worried, the flip top was sealed tight and opened with a reassuring "pop."

Rusty Beaver is a new nano-brewery that opened up in Ashland, Virginia on June 15. The combination brewery and home brew supply shop is run by Virginia Barbeque owner Rick Ivey and his son Austin, the brewer. Plans call for Virginia BBQ to be available onsite eventually.

Roy's Big Bad Brown Ale pours a deep cocoa brown with a thick and frothy beige head. It's a pile of foam that just begs to poked and prodded with a finger. Colleen remarked, "It looks like a root beer float." The aroma is fairly mild, with hints of sweet chocolate and vanilla. The flavor profile is much more robust than the aroma would indicate. Bitter chocolate, brown sugar, vanilla are accompanied by a significant bitter hop presence. The descriptor "American" Brown Ale would certainly be applicable. I was reminded of the seasonal Sierra Nevada Tumbler Autumn Brown Ale.

As I've noted in previous posts, I typically do not order sampler trays, or "flights" when visiting a new brewery. I don't feel they are a good way to taste beer. Too many flavors at once combined with small samples can hardly give a proper impression of a brewery's beers. The Rusty Beaver flight we ordered during our visit, after the long day we'd already had, didn't allow me to fully appreciate this, or any of the brewery's other beers. I am very happy that we opted to grab the growler of Roy's Big Bad Brown Ale to go. I'm looking forward to going back for more of this, as well as the other Rusty Beaver offerings.