After an afternoon of stacking firewood and other yard chores, we decided to hit Capital Ale House for an early dinner on Sunday. (Or was it a late lunch?) While deciding on our beer selections, our server suggested a "mango habanero IPA from Starr Hill." I was intrigued but not convinced, so she offered a taster. After that I was convinced.

Some quick Google-fu at the bar helped me learn that the beer was called Mango Genius and was a collaborative effort with Brothers Brewing. The beer pours a bright golden color with a white head. The aroma is citrusy and fruit-like. Sipping the beer, the flavor is what I can best describe as tropical citrus "juiceness." The habanero makes its presence known at the end. A subtle warmth slowly comes into play in the finish. It never burns, but teases in the back of the throat. 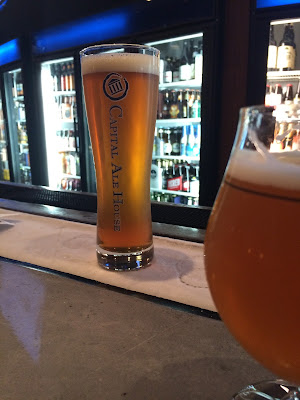 This was an excellent suggestion and beer I'd definitely order again. In fact I did, to go along with a very spicy Mexicali salad. The salad, with copious raw jalapeños, went well with the "cooling" citrus fruit of the IPA.

And that beer in the foreground? That's Colleen's glass of Heavy Seas Red Sky at Morning. This is a version of the brewery's delightful Red Sky at Night aged in Chardonnay barrels. Two excellent beers from two of our favorite breweries, with a Redskins win on the bar TVs, made for a enjoyable afternoon.