Depending on traffic, it's a 45 minute or more drive to the indoor range. The more I make the trip, the less onerous it seems. Still, sometimes I have to wonder if the 30 - 40 minutes spent shooting is worth it. Then I get to the range and start shooting, and I think, "Yea, totally worth it."

After work on Thursday, we made our way down I-95 for a bit of fun. My goals for this session were to work mainly on head shots at 10 yards and some 20 yards drills. I can generally keep the hits in the head area of the IDPA target at 10 yards, but they do creep out of the 4" -0 circle at times. Sight alignment is critical.

After a while I pushed the target out to 20 yards and made a few dozen holes. When I ran the target in I noted, although centered, the majority of the hits were low. Even though it seems I am holding the sights over the current place on the target, apparently my aim is low. Conscientiously holding higher, the next batch was much better. The large front sight covers so much of the blurry target at that distance that I really need to be aware of where on the target I am holding. (Before you ask, I've tried narrow front sights, I can't see them.)

I also decided to get in some practice with the S&W Shield, using the small 7-round magazines. Due to warmer weather and social conditions, I've found myself carrying that set up recently. I thought it important to get in some refresher shots. After 50 rounds, fired in fast groups, I felt good (still) about the gun. It was wiped down and put back on my belt.

I was a fun time, but too soon it was time to make the long, but worth it, drive home. 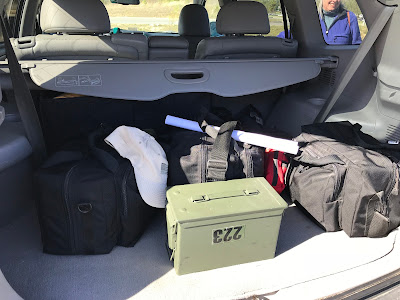