After work yesterday, Colleen, "Checkered Flag" and I drove down to Winding Brook Indoor Range to get in a little trigger time. Even though we all enjoy shooting together, and we're willing to share a lane, we still prefer to do our own thing in our own lane. The folks at Winding Brook opened up another bay in order for us have adjoining lanes. We had the bay to ourselves most of the time. As I was trying out new ear protection, I was actually a little disappointed in this rare trip without a rifle going off next to me. :-) 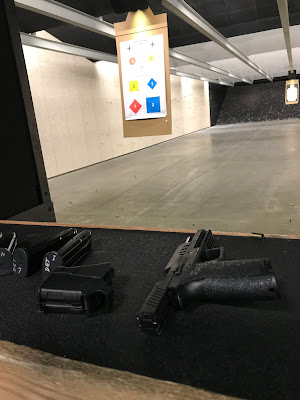 I began with the 50 round Julie Golob drill, shooting quickly, but at a close 7 yards. It's been a while since I ran this favorite drill.

Next I grabbed the flashlight and did a little more flashlight work at 7, 10, and 12 yards. I tried to get in some rapid groups too, just to test the stability of my hold. Taking several strings of 10 yard headshots, I ended up putting a few outside of the -1 head circle, but still in the head zone.

Feeling mostly satisfied with the flashlight, I put it down and moved the target out to 20 yards for some slow fire. My confidence up, I didn't recall the target until I'd shot the whole box of 50 rounds. A dozen -1 hits, with the rest in the -0, greeted me when I finally brought the target into viewing range.

Finally, another run of Julie Golob drill finished my session. Usually near the end of a 200 round practice session, my shooting degrades a bit. I didn't experience that this time, probably because I took a few more breaks than usual. Since we were the only people in the bay, there was the opportunity for some friendly conversations with the range officer. I also enjoyed stopping occasionally to move over to watch Colleen and our friend shoot.

The three of us hadn't been able to shoot together since February, and we enjoyed much shooting talk on the drive home. (Which was in contrast to the drive to the range when my passengers took the opportunity to nap.) A quick cleanup at home and we were off for a fine Italian meal, marking an early kickoff to the weekend.