A Rain Break and an IDPA Match

Once again, Mother Nature smiled upon the Cavalier IDPA match. Like last month's match, the morning broke clear and relatively cool. Despite rain the night before, and later that evening, the sun shone during the morning's shooting event.

Our shooting began on a deceptively simple, two string stage called "Get Off My Lawn." Starting with hands on a lawn mower handle, we engaged five threat targets in tactical priority in the first string. There was a lone non-threat target to draw in anyone tempted to go too fast. The second string started the same way, but we had to move the left to find a single steel target hidden behind a barrel.

The next stage, "Unlucky 7," started with engaging two close targets while retreating cover. After engaging a lone target at that position, we moved forward and left across the stage. Targets found at two more points of cover tested our skills in shooting with sharp leans around cover.

In "Holy 7" we were seated in the pew in a simulated church. Our gun and magazines were in a bag at our feet. (Off body carry is always a bad idea, IMO.) There were three closely spaced non-threat targets directly in from us.  The placement of seven targets down range required careful aim between and around the non-threats. 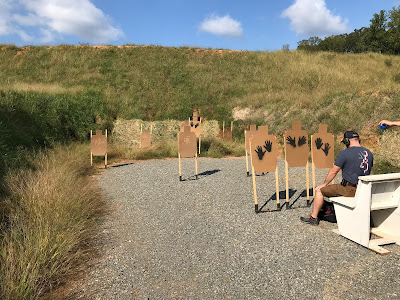 There was a slight slowdown during my shooting of the stage as I lost my place in the targets. Even though I had a plan, and ultimately shot the targets in the planned order, not being able to see more than one or two of the targets at a time combined with the multiple levels of priority led to some hesitance. I have no doubt that challenge was by design.

"Hall of 7" was based on a stage at the National match; the stage designer was one my companions on that trip. Gun and all mags were placed on a table where we were seated. After engaging two targets in the open, we moved right across the bay, stopping at four positions to shoot from cover. After the far right most position, we moved down range to finish the stage. Lots and movement and lots of cover made for a fun course of fire. 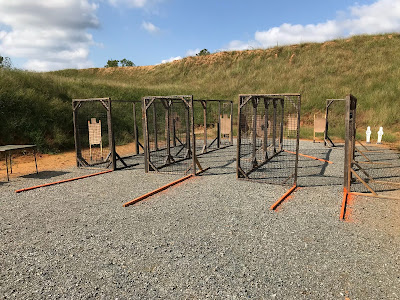 We finished the match on "Deja Vu 7." Starting with our gear on a barrel, we loaded and took care of two close targets. After moving backwards to a point of cover, we then progressed left and forward to shoot from three more points of cover. Short target distances made this a stage where one might be tempted to shoot too fast. A couple of non-threat targets made that a dangerous temptation. I avoided the non-threats, but aimed too high on the target with a non-threat tacked to the front. Interestingly, I hit the target exactly where I was aiming, but apparently misjudged where on the target I needed to hit, and made a tight group of two holes — right in the -1 zone. I was -3 on the stage, but those 2 points were exceptionally frustrating, and I credited that mistake with dropping me three spots in the overall standings. But, I hit no non-threats the whole match. :-) 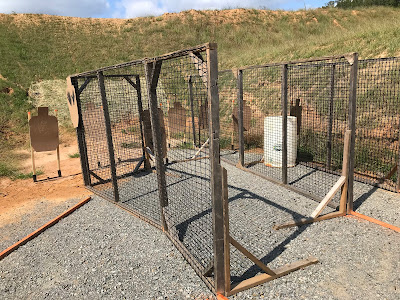 The range is under some temporary restrictions to shoot only in to the back berms while they establish the grass on the side burns. Despite that restriction, the match designers put together some very good stages. The creative use of walls and target placement provided a wide range of shooting angles and challenges. One would hardly notice the limitations.

I felt pretty satisfied with how I shot. My 14 points down was a little higher than I would have liked, but I still managed to finish 11th of 45 shooters, with one of the top 10 being a PCC shooter.

After the work and stress of last week's IDPA Nationals, I was very much looking forward to the relaxed enjoyment of this local match. It was indeed a pleasurable morning of shooting. I got to visit with friends, including some I had not seen in a while, and meet some new ones as well. Good shooting is best when paired with good people and this was an especially enjoyable match.