My memories of this month's Sanner's Lake IDPA match are a mixed bag. On one hand, I shot as well as I think I ever have — for the first four stages. For whatever reason, I lost my edge on the last two. But on the bright side, the good shooting on the opening stages somewhat offset the breakdowns at the end.

The first stage we shot, "In the Line of Fire," found us seated at a table with the loaded gun on the table and reloads on the belt. Six targets were arranged from three to twelve yards out, some partially hidden, some open, each requiring three hits each. I was just one point down for the stage, shooting a bit low on one target near the non-threat. 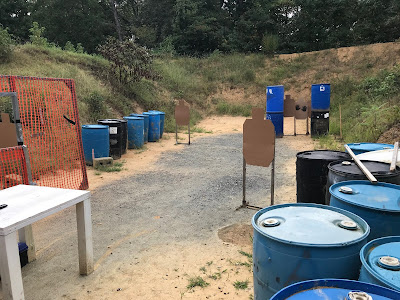 "Last Man Standing" was next for us. Starting at either end of a wall of barrels, a nearly symmetrical arrangement of targets was to found around either end. There were two pieces of steel to be engaged as well. The steel was painted beige to match the cardboard targets, and the earthen berms, and placed in front of a cardboard target. Some of the targets on either side required a challenging lean around cover in order to engage.

I was pleased with my run on this stage. I remembered the lesson from the Brandon Wright class and got my gun up as I moved into position before I could see the target around the barrel. I left the first position as I fired the last shot, another lesson learned, but at the same time felt I may have shot a little low. Sure enough, that was my two points down on the stage. 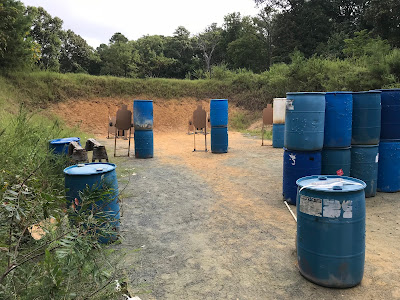 On "The Last Deal" we started facing three open targets at an opening in a wall of barrels. Then moving to either side, there were targets to be engaged, again testing our ability to shoot while making challenging leans around the corners. This was another good run, with just one point down.

The next stage was one I particularly enjoyed. Entitled "Welcome Home," we started by engaging three targets in the open while retreating. Arriving at the first cover position, we found two targets fronted by a non-threat. My plan was to take an extra shot on the first array while backing up in order to go to empty at this position. Making all -0 shots here allowed that plan to pay off. After a quick reload while moving, the next shots were on two steel poppers placed menacingly close to a non-threat. And again, those poppers were painted to match the color of the non-threat. A final quick sprint to the last target finished the stage. A down zero run gave me a 2nd place overall finish for this course of fire. 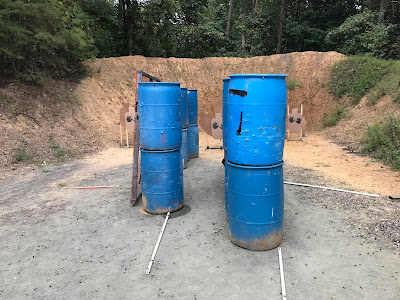 At this point, I was feeling great. I did have a nagging thought in the back of my head, reminding me I was on track to (finally) get through a match with no hits on non-threats. Getting at least one in a match seems to be the bane of my shooting of late.

As I approached the bay with the final two stages, I saw the next stage, "Left Behind," had some tight non-threat shots. But the stage after that, the final one, had none. Make it through this stage and it's golden.

The stage started with some shots from both sides of a barrel stack. The next position had the tight non-threat shots, essentially requiring head shots. Another move and a couple more targets, and another non-threat was seen. The final position had an interesting array of two targets. The first one had a steel plate behind it that activated a swinging non-threat if you made a -0 body shot. The final target was mostly blocked by the non-threat at rest, and intermittently revealed once the swinger started. The shooter had the option of going for head shots on both targets, avoiding any worry about the swinging non-threat, but risking hitting it at rest. I opted to activate the swinger and take two easier body shots. And then...


At the end I saw I had hit no non-threats, but had a miss on one of the head shots. When the scoring tablet came to me to approve, I saw 15 points down! "You had some misses," said the SO. I didn't learn exactly where, but am assuming I simply avoided the non-threats too much. I had actually felt I shot the stage well, but obviously I was distracted. Lesson learned; focus on the individual stage, not the match. But, hey, no non-threats were hit. :-)

I was now admittedly somewhat distracted for the final stage, which was a standards stage. Nine targets in a line at 5 yards. Four overlapping pairs with one lone target, and most were partials. The directions were simple; gun unloaded on the belt, reloads on the barrel, draw and fire two shots, only, at each target. The smart way to shoot this was to shoot across the target line, hitting the head shots on five targets, reload, then finish with four body shots across the line. Should have been simple and clean. Instead I opted to shoot up and down on the the paired targets as I moved across the line — slower and way too many transitions. I actually managed to drop one head shot too. 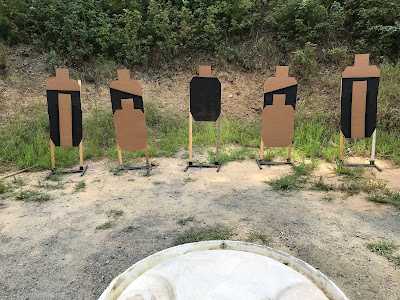 The last two stages were a let down to say the least. I let the pressure of an meaningless goal distract me. Instead of being dialed in to my shooting as I had been, I don't even recall being all that aware of my shooting on the next to last stage, and it showed. Despite the rough finish to the match, I managed 9th place of 61 Overall, and 7th of 33 in SSP. Reviewing the scores, those misses caused a significant drop in placement.

That all said, it was still an extremely fun match. We had a great squad of shooters, many of whom I had never shot with before. The six stages were completed in just under three hours. Stuart and I made our monthly beverage shopping stop, and enjoyed a tasty Mexican lunch on the way home. The weather was on the humid side, but otherwise it was a fine day for shooting. This was my last match, and perhaps last range trip, before we head off to the IDPA Nationals in a couple weeks. It's time for some dry fire...