A Beautiful Morning for IDPA

On Saturday morning, when I headed out for the monthly Cavalier IDPA match, the dashboard thermometer read 57°. There was definitely a touch a fall in the air. The temperature would eventually climb to around 81°, but still a most pleasant morning for shooting. I hadn't made it to this match since May and was looking forward to returning.

Five stages were set up in the new large bays. As I walked up to the first stage, I thought the shadows were playing tricks with my eyes. Facing two rows of targets, we saw numerous black vertical lines and non-threats, among which we were challenged to find seven valid targets. 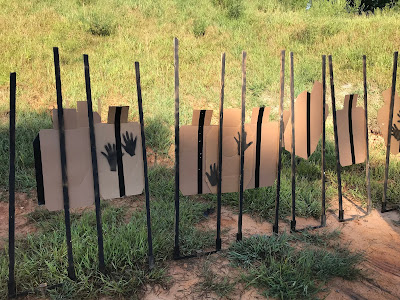 The stage designer had added lines matching the target sticks to both threats and non-threats. Two of the threat targets were in a row behind the others, which drew several shooters into shooting them out of priority. Even on the threat targets, hits in the black didn't score. The targets were all shot from low cover behind a barrel. It was an interesting and unique stage, and I shot it -2. The stage designer also happened to be on our squad, and was subjected to much good-natured ribbing.

Cavalier stages typically involve a lot of movement, and the next stage was no exception. Our unloaded gun was left in a box, and all magazines were placed in a second box. We started the course of fire away from those two boxes and ran to retrieve the contents. Moving to one side of the course there were targets to be shot from two points of cover. After which, we made a run across the stage and down a tight winding hallway to find more threats. I dropped a magazine during my reload which cost some time, but shot the stage just one point down. 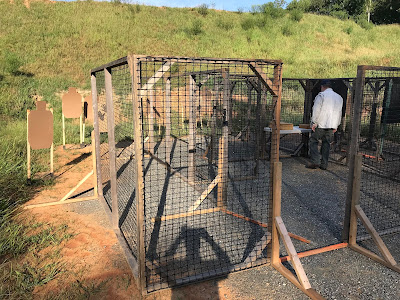 Stage 3 consisted of two quick strings. For the first string we had a close line of five threat and two non-threat targets to our left. To the right, a lone target much further away. After shooting that string, we moved to stand centered on a wall. Behind the wall were two targets set behind a non-threat. Each required two body shot and one head shot; the left target from the left side of the wall, the right target from the right. I shot the stage -2, both points dropped on the first string.

Stage 4 was a simple stage, and at the same time, quite complex. At the start we engaged two distant falling poppers. Shifting slightly we found three nearby paper targets. Leaving cover we ran down a hallway, stepping on a stomp plate on the way. That activated a swinging target and swinging non-threat; the non-threat passing in front of the threat target at a varying rate. The swinger was engaged on the way to, or at, the final point of cover where two distant targets were also engaged.

There were almost as many opinions on how best to run the stage as there were shooters. I decided to do a reload with retention on my way to the stomp plate. There was little movement between shooting the swinger and turning to engage the final targets so I didn't want to waste time reloading there. Despite miming my tactical reload multiple times before shooting, I dropped the magazine on the ground instead of pocketing it. I lost some time picking it up after completing my reload. That habit is one reason I rarely opt for that reload option, and the reason I should practice it more.

The final stage had me wondering if it was two stages in one. There were 16 targets placed throughout a labyrinth of walls. Each target required but one hit, instead of the usual "best two per paper." 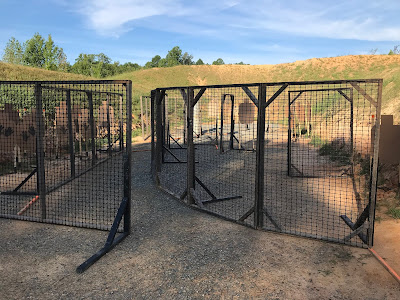 As we wound our way through the course, we found from one to six targets at each position. The six target array was fronted by four non-threats, which made slowing for head shots necessary for some targets. As I neared the end of the course, my mind started with the doubt, "Did I miss going into a corner to find a target?" I was admittedly distracted at the end and I think shot the last few targets without full concentration. When I finished, the SO confirmed I had shot all targets, and I walked away with a smile for a successful match. Suddenly I heard, "Hit on a non-threat." Sure enough, after a clean match I had pulled a shot into the last non-threat on the last stage of the match. As I remarked,  "At least I'll get over it before the next stage I shoot. Next weekend." 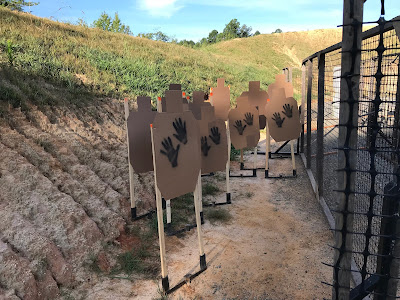 Despite that whiff at the finish, I was generally pleased with how I shot. I felt good about accuracy, speed, and stage planning. I finished 12th of 43 handgun shooters overall, and 6th of 19 in SSP.

As always, the stages at Cavalier are challenging and never boring. Match director Chris and his staff always come up with interesting, fun courses of fire that put our skills, both shooting and thinking, to the test, in a most enjoyable manner. I always enjoy the time spent shooting and the conversations with friends and fellow shooters. After we finished shooting, we broke down the stage, and I was on the road home by 12:30. The sunny drive on country roads, with good blues on the radio, soon had me forgetting that final errant shot and looking forward to the next time.