I managed to get in another visit to the range this week. (Actually it's not the range time that's hard to find, it's the time to travel to and from the range that eats up the afternoon.) I felt I needed another session after the mixed results last time.

I started out shooting at 10 yards, at a moderate pace, alternating between body and head shots. I'm starting to feel a lot more confident with the head shots now that the front sight doesn't cover the whole target. I can start trying for -0 hits instead of just "on paper" when aiming at the head zone.

A fresh target in place, the next 50 rounds were fired in rapid, 4, 5, or 6 shot strings. Shooting as fast as I could get an acceptable sight picture, I was seeing the benefits of the narrow sight even on the larger target zone and feeling more confident in my shot calling.

Next up was a bit of longer distance shooting with the target set at 20 yards. Here again, I was seeing the benefit of the competition sites. More target area visible behind the sight means easier and more precise target alignment. Until the final magazine, when fatigue led to faster, more careless shooting, the majority of the hits were in the center -0 area.

Opting to shoot one more box of ammo, just to finish on a "high note," I hung the target at an easy 7 yards. Splitting the shots between the head and body zones, I dropped just one head shot into the -1 head area. 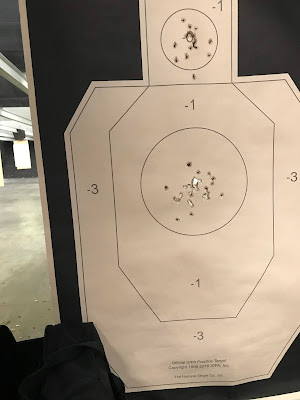 Speeding up shooting by the 50 rounds of extra fast trigger pulls, my typically short range time is finished even more quickly. Most days the travel time for a range trip is four times the time spent shooting, unless there happens to be an incident on the highway, at which point the ratio becomes even more lopsided. However, the shooting is fun and beneficial, so it's an acceptable tradeoff, for now.