On Saturday, I joined three friends for the trip across the Potomac River to shoot the monthly IDPA match at Sanner's Lake. I was looking forward to shooting the new fiber optic sight outdoors in sunlight. The Delaware State IDPA Match was also taking place over the weekend, so attendance at the monthly match was low, with just 38 shooters participating.

The first stage had us moving and shooting around walls. Seven targets requiring two hits each were found on the stage, along with a non-threat and a barrel stack adding to the challenge. It was a fun, quick stage that got my match off to a good start, shooting down zero.

Next up was an unusual Standards stage with a lone target set at five yards, and engaged in four separate strings. String 1 was draw and fire one shot, string 2 was four rounds low ready, three shots strong hand only from low ready was required for the third string, and two rounds weak hand only from low ready finished the stage. This turned out to be too complicated for my early morning brain. After firing just two of the SHO shots, I moved the gun to my support hand and awaited the start of the next string. After a bit a I heard a whisper behind me, "Wasn't it three shots?" D'oh! I quickly transferred the gun back and fired another shot. Game over. That delay was 5 seconds or more, and moved me to the bottom of the pack for that stage. Moving on...

The next stage was shot from behind a barricade with three target arrays set down range. Each pair of targets had a non-threat in the center, with the center array requiring shots from both sides of the barricade. I ended up shooting this stage twice. On my first run, as I moved my gun to the second target on the left side, it wasn't there! Looking over my gun I saw the target had blown over and was laying at a 45 degree angle. The stage was reset and I made another run. This was another good run, which I shot just two down. 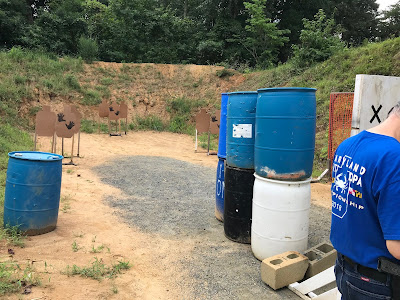 "Bad Invitation" was shot from a seated position with the gun loaded with six rounds and set on the table. Three paper targets and a falling steel popper where set up on each side. The left and right arrays were shot in two separate strings; three paper, a reload from the belt, and repeat the second string for the other side. I shot the stage just two down. However, the posted online results that evening showed a HNT and a PE instead of the two down one targets. I learned later this was a result of improper data entry on the tablet, that error dropped me down some 8 spots in the posted rankings. 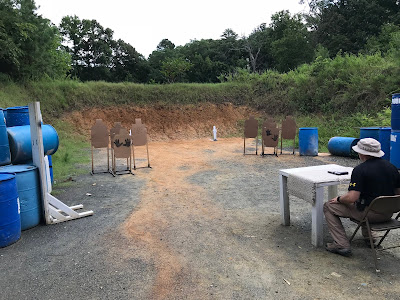 Stage five was another Standards stage with six targets placed from 5 to 16 yards. Starting with the gun held in the support hand at low ready, the closest target was shot WHO, the next SHO, and the final four, freestyle. I was 6 points down for the stage.

The final stage we shot was the IDPA 5x5 Classifier, which was incorporated into the match to, theoretically, discourage sandbagging. I was confident going into the stage. I shot at a pace I was comfortable with from my practice this week, and which would have upheld my classification. Unfortunately my shots were all grouping low, leading to significant points down. I was also aware at the time that I rushed the final head shot and shot low.

I had some good stages, and some disappointing stages, never really finding my groove. Although I shot most stages well, I never really felt like I was fully engaged. I "officially" finished 13th overall, and 6th of 18 on SSP — if the scores are to be believed. In a post match review with others, unfortunately several scoring errors were in evidence similar to the ones mentioned above for other shooters as well; where target points down were entered as PE's and HNT's. My overall placement was likely 10th or 11th. Match staff were in short supply, and there was some unfamiliarity with the scoring devices by the willing volunteers. There was no Lexus at stake and I was there for the practice above all. While disconcerting on paper, I'm not losing sleep over it, but will be sure to review future score tabulations more closely.

Still, the match illustrated some of my own weaknesses to be addressed. Despite all my practice recently being of the "stand and shoot" variety, I tend to not do as well on "stand and shoot" type stages in matches. Sight impatience? Head games? I'll figure it out.

The match ran quickly and smoothly, and we were leaving the range by 11:00. While fun, the stages were a bit less exciting than we usually see at this venue. I suspect that the limited staff and poor weather in the days before the match led to simpler stages being set up. However, the long drive home was full of fun conversation with friends, not to mention stops for lunch and to shop for distilled beverages. I have some things to work on in future practices, and am looking forward to improvements going forward.