There was thick fog in the fields as I headed to the monthly IDPA match at Rivanna Action Pistol Club on Saturday morning. The sun was behind the clouds but I knew it was going to be a warm, humid morning. It's Summer. In Virginia. No surprises here. I did drive through a bit of rain, but a quick check of Dark Sky on my phone confirmed it was only a passing shower.

As we waited to start shooting, my glasses were already fogging up from the humidity, but at least the skies were somewhat overcast. The opening stage for our squad had us standing with our back centered on a small wooden fence, facing five targets placed behind a bunch of barrels, each target requiring three hits each. The stage brief indicated the center target was to be shot first, followed by the rest in any order. A step or two was required in order to get shots on all targets. I got the first stage jitters out of the way, with 4 points down. 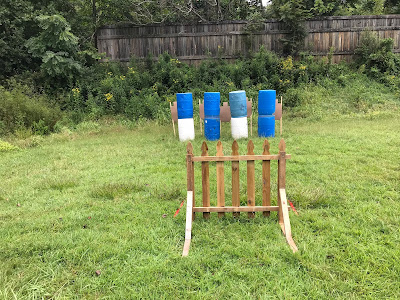 On the second stage, we started facing up range, weak hand on our "credit card in the ATM." Turning, we engaged three targets while standing, and a fourth as we moved to cover. At the next position there were two targets, with non-threats positioned such that I took "safe" headshots. Moving to the final cover position we found three more targets. I shot the stage zero points down, but had an otherwise good run fouled by a hit on a non-threat target at the last shooting position.

Next up was a fun stage shot while seated at a table, the unloaded gun and all mags on the table to start. After loading the gun, we engaged two up close targets first. Four targets fronted by non-threats were placed midway down the stage. The final three targets were longer shots with two of the targets well-hidden behind a "good guy." Some leaning in the chair was required to make the shots.

To my delight, I turned in my best performance on this stage, shooting just one point down. It seems my longer distance practice of late paid off. After hitting a non-threat on the previous stage, this was a good pick-me-up. 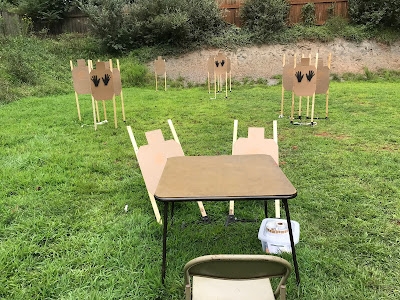 The final stage brought in the strong hand and weak hand only shooting. I struggled with these skills in practice the other day, but took my time and tried for good hits, regardless of time. The stage started with us shooting from behind a barrel stack; three targets WHO around the left side, then three SHO around the right. We then ran to another position to shoot three more targets freestyle. I took a few extra shots and didn't feel I shot all that solidly, but ended up just 2 points down.

Even with limited trigger time time the last couple of weeks, I was moderately pleased with my shooting. Obviously the one HNT stings, but accurate distance shooting and lack of mental errors are satisfying. I placed 8th of 55 overall and 5th of 28 in SSP.

It took a while to get all shooters through the 4 stages set up in two bays. We finished shooting around 1:00PM. The match offered a good balance of challenges; shooting while standing, shooting on the move, shooting while seated, SHO / WHO shooting, as well as a mix of close and distant targets. While quite humid, the weather was not overly oppressive, especially considering it's August. There was a brief sprinkle while shooting the last stage, but the rain held off until the match was over. It was quite a fun morning with friendly folks and good shooting.