As I work through my recovery, the enjoyment of alcohol and cigars figures frequently in my conversations with health care professionals.

The earliest discussions took place in the ICU. For three days I was asked by numerous people if I was a smoker. I replied I enjoyed the occasional cigar. Most of the time the person said nothing. Maybe they were simply relieved I didn't use cigarettes.

Just once the reply was "you can't do that." One nurse replied, "If you're like my husband, you won't give that up." While being interviewed by a doctor, he replied with a smile, "Not in here, right?"

Most of the comments about alcohol revolve around warnings about "more than one or two drinks a day." Despite an oft misunderstood reputation, that's closer to my total in a week. Picking up prescriptions, a pharmacist remarked, "I'm supposed to warn you about alcohol, but let's be realistic..." I have treated myself to a beer on occasion since the heart attack. As an aside, I now (mostly) limit myself to one cup of coffee a day. That's a major change for me.

I'm resting at home now. I open my humidor and rearrange cigars occasionally, taking in their aroma. I won't be smoking for a while, probably closer to the end of my cardio rehab sessions. It's too cold outside to enjoy a smoke on the deck anyway. I've also started questioning the wisdom of sitting in a smokey lounge with the associated second hand smoke.

Meanwhile, I'm enjoying telling the rehab nurses one of my goals is to get back to "shooting, bourbon and cigars." They simply roll their eyes. We did go to the liquor store recently to pick up some "future" libations. I am still looking for that "special" celebratory cigar for when the day comes...

"Not in here?" That still cracks me up. 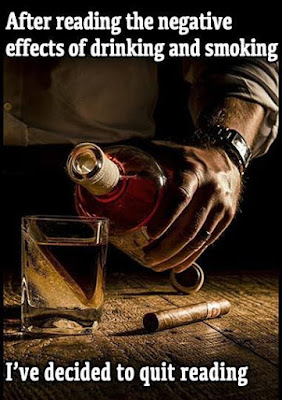