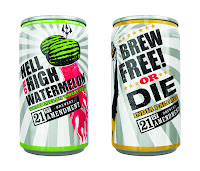 More new beers for Virginia. From a press release:

SAN FRANCISCO, Calif. – East Coast native Nico Freccia is returning to his roots, and he’s bringing beer. Craft beer in a can, that is. The co-founder of San Francisco’s 21st Amendment Brewery tells Virginia’s craft beer fans today, “We drink what we can; we can what we drink.”

Freccia and Shaun O’Sullivan, the iconic personalities behind one of California’s few canning craft breweries, opened the bustling 21st Amendment Brewery in San Francisco’s South of Market neighborhood after meeting in a home-brew class. The release of the Brewery’s two canned brews, Hell or High Watermelon Wheat Beer (recently rated “#1 Beer to Drink from a Can” and “Top Fruit Beer” by Draft magazine) and Brew Free! or Die IPA (winner of multiple medals internationally) marks the brewery’s first foray into beer sales on the east coast. Both beers will be available in cans and on draft in select cities in Virginia (but not in DC, unfortunately).

Chief Watermelon Officer Freccia says, “Virginians understand the CAN-cept of great craft beer, and we feel honored to be a part of the local beer landscape.”

These two 21st Amendment beers are currently available in some Northern Virginia stores. Will they make it to Fredericksburg?
Mused by David