Another Visit with the "Bitch" 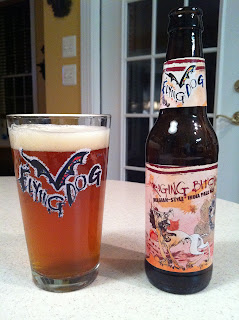 Last winter we were introduced to Flying Dog Raging Bitch. The beer was released to celebrate the 20th Anniversary of Flying Dog Brewery. Described as a Belgian-Style India Pale Ale, it is now a year-round member of the Flying Dog family. This week I revisited this interesting beer.

Belgian. India Pale Ale. That label is as contrary as it was in 2009. My sample was served from a bottle, in my "official" Flying Dog glass. The golden amber color and frothy off-white head sure looks like an IPA. I get citrus hops in the aroma. Or do I? Sniff again and I'm detecting some typical Belgian yeasty notes. The flavor initially tends towards the sweet and yeasty. However, that is quickly replaced by the bitterness one would expect in an IPA, and that bitterness lingers in the mouth. One of the issues I often have in trying to describe a beer is taking repeated sips, until suddenly my glass is empty. It happened again! This is a complex beer and the flavor characteristics are a blend of two styles. Hard to describe but certainly easy to drink.

Disclaimer: This bottle of Raging Bitch was an unsolicited gift from the brewery. This review written of my own free will.