The weekend, on Veterans Day, I enjoyed another USPSA-style fun match held by King George Actions Shooters. Coincidently, their first USPSA fun match was held on another holiday, Labor Day. For those interested, keeping with the holiday theme, there will be an IDPA-style fun match on "Black Friday," the day after Thanksgiving.

Sixteen shooters participated in this weekend's match. I shot with some of my usual friends, and we were also very glad to see some new shooters returning who had tried out the sport on Labor Day. Four stages were set up in two bays. Three USPSA classifiers were used as the basis for the stages, giving us a variety of challenges. Of course, being an unaffiliated match, the classifiers and match were just for fun. No pressure!

The first bay had "Life's Little Problems" (#09-10) set up at the back of the bay. In the front of that was placed a variety of static and moving targets to create a longer course of fire. A steel popper activated a drop turner and a stomp plate activated a bear trap target combo. The shooter started this stage, aptly named "Full House," in the cowboy action house and proceeded to engage everything in the bay. The stage was a lot of fun and I especially enjoyed the chance to shoot the fast movers. The stage also provided a lot of laughs for our squad. After we finished setting up the match and tuning the movers we were so anxious to shoot that we geared up and began shooting. After the first shooter, we realized we had skipped the walk through! I guess as the last shooter on the squad I had a bit of an advantage.  :-)

For Stage 2 we shot the classifier by itself as intended. That's twice I had to drop down to shoot through that low port! 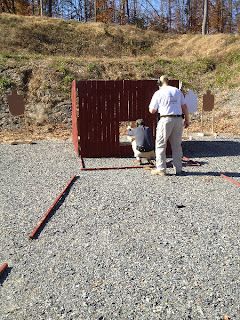 The second bay held two stages that tested skills at opposite end of the spectrum; "Long Range Standards 2" (#08-05) and "Table Stakes" (#09-13.) The long range course had three targets set up at 150 feet. Three strings of fire made up the challenge, requiring 6 shots on a target from three positions; standing, kneeling, and prone. The actual classifier requires each string of 6 shots to be completed in 5 seconds. In the interest of safety, and in deference to "older" bodies, the par time used for this stage was extended to 10 seconds. Let's just say we all had many laughs and good natured ribbing over this one. I managed to put 3 on paper standing, 4 kneeling (2 of them A hits) and 3 while prone. I've shot at that distance only one other time, on a smaller target, but without the pressure of clock.


We finished on "Table Stakes." I simply went too fast on this one and needed extra shots on the small, but close, steel. I knew going in I was going to try to go fast, especially since it was all for fun. Even though I didn't shoot the stage well, I walked away with a couple of lessons learned that I can use later. So, no loss at all!

Overall, I was quite pleased with how I shot. But more importantly, I had a great time with friendly folks who were all there to simply to have a good time as well. It was a beautiful Virginia Fall day, which added to the pleasure. When I left the house in the morning it was 37° outside. Not too long after I got to the range to help with the setup my jacket came off. By the time I left the range, my car thermometer read 77°.

As noted before, the Northern Virginia Gun Club, home base for the King George Action Shooters, is a quality venue within a very easy drive. There seems to be a lot of members of NVGG who are interested in the action pistol sports, and their participation is good for our sport. Currently, scheduling conflicts are holding back the establishment of a regular match date, but hopefully that will change soon and we'll see USPSA sanctioned matches too. 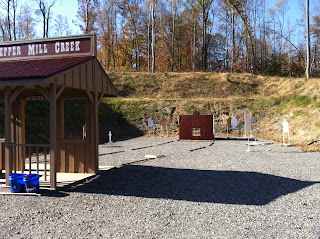