My Reputation Precedes Me

Monday was one of those dreaded "drive to DC and sit in meetings" days. The company was hosting a conference and we had employees from around the world in town, some of whom came bearing gifts. One of our managers who lives in London brought me two bottles from Belgium's Brasserie Du Bocq; Waterloo Double 8 Dark and Waterloo Tripel 7 Blond. From another employee in Ireland came three beers by the Dungarvan Brewing Company; Copper Coast Red Ale, Helvick Gold Blonde Ale and Black Rock Irish Stout. Coincidently, the first two of these I got to try in Ireland recently. I'm looking forward to getting another taste of them, and of course trying all the other beers as well. 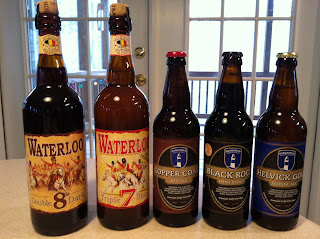 In another awesome surprise, one of the system administrators from our Colorado office brought along one of the new stainless steel growlers from Oskar Blues, as well as a cap from the brewery. Unfortunately those two gifts got locked in a room while I was in a meeting, so a coworker will be delivering those treats later this week.

All these great beer gifts were certainly a fine consolation for being in meetings all day. I guess it's good to be the guy who divvies up company resources among business units. Well, I don't mind a little bribe every now and then.