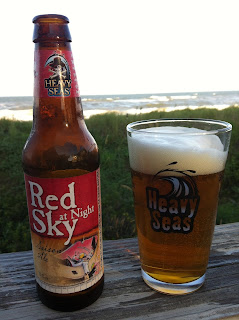 Nope, not a post about a picturesque sunset. I'm talking about the tasty Saison from Baltimore's Heavy Seas Brewing. Red Sky At Night is a favorite of ours, but one that's been an elusive libation. Last year the brewer was only able to brew a limited quantity, and none of it seemed to make it to Fredericksburg. I knew the beer was back this year, but again, never saw it locally.

Since I knew we'd be traveling to the Outer Banks for vacation, I held out hope that Chip's would have some. A couple years ago I found some other Heavy Seas beers there that I couldn't get locally. (Now as then, I consider this a failure of our local distributor, not the brewery.) Entering Chip's I immediately scanned the shelves and, sure enough, spied 2 six packs of Red Sky. Colleen grabbed one and asked at the counter if we could get a case. The answer was there's two sixers left in the cooler, and two left on the shelf. That's all that was left, so we grabbed what was left.

Back at the beach house that afternoon, we cracked a few open to enjoy before dinner. The beer is as we remembered. It presents a pleasing Belgian yeast and sweet banana fruitiness, in combination with some wheat in the background. There's a bit of mild white pepper in the finish. This is an enjoyable beer with a light mouthfeel.

Taking the accompanying photograph turned in to an adventure, but one that was quite apropos. As soon as I finished pouring my beer, a gust of wind came off the ocean, scattering the foam from my glass into the wind. Three times the bottle blew off the deck railing before I snapped the picture. Despite my desire to drink this "stormy" beer outside, I was quickly forced to retreat indoors.