This past Sunday I finally made to the monthly USPSA match put on by Fredericksburg Practical Shooters. For a number of reasons, I hadn't been able to hit my local match since April. As opposed to some Summer matches in previous years, the weather for this August event couldn't have been nicer. The temperature barely made it to 80℉, and there was even cloud cover to offer relief from the sun for a good bit of the day.

Many of the courses of fire in the match incorporated falling steel, and three stages also included swinging or popup targets. One interesting stage, "Shake It Up," provided a fun scenario. To get to the back half of the course, the shooter had to open and pass through a door. That door was "unlocked" by hitting a falling popper through a port in the wall. In addition, that falling steel also activated a swinging target at the rear of the stage. The stage offered numerous options on target engagement order and reload timing, especially for the Production shooter.

Another fun stage was called "Point the Way," and was arranged in an inverted V. The shooter started on either side and moved towards the center. Targets were arranged to the shooter's left and right, with the targets on the opposite leg engaged through low and high ports. Although there were the same number of targets on either side, the two sides were not mirror images of each other. I selected the longer run, but the one that had fewer targets to be engaged from a squatting position. 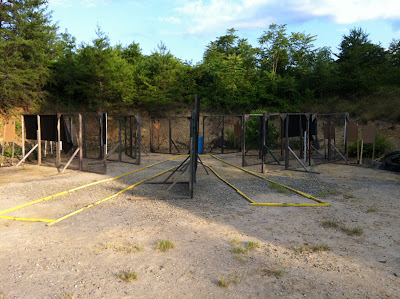 The Classifier stage selected for the match was "Steely Speed IV," CM 06-07. The six pepper poppers at 15 yards were all partially blocked by non-falling hard cover. Add to that the challenge of shooting from behind a barricade, and you have an interesting stage. This was a fun stage to shoot, despite its intimidating appearance.

At one point in the match the low morning sun was shining into my face. The combination of the sun and smoke made it quite difficult to see the targets beyond the gun. On top of that there was a lot of what I assume to be unburned powder sparkling in the sunlit smoke in front of the gun. (It's factory ammo.) I blame any missed shot on the distraction provided by the display. "Oooh sparkly."

This was the first event I've gotten to at Fredericksburg since the club started trying out the half-day format. With the crowd split into morning and afternoon sessions, I missed seeing some friends. However, I very much enjoyed the shorter day as opposed to the 7+ hour matches previously held.

There's always a good mix of challenging shooting to be found at Fredericksburg. It's a large match with 8 stages in all; 6 field courses, 1 speed stage, and the Classifier. It's no surprise that the online registration for the morning session filled in just four minutes last week. Part of the challenge of shooting the Fredericksburg match is beating the registration rush! I'm looking forward to beating that rush again next month and getting another crack at whatever fun stages the match directors have in store.