In what is now a holiday tradition, a bunch of us gathered at the range for the 2nd Annual St. Gabriel Possenti Shooters "Day After Christmas" celebration. The informal and wholly unorganized group of Catholic shooters paid homage to the Patron Saint of Handgunners by spending the morning enjoying talking about guns, politics, and of course, shooting.

I was especially looking forward to the event, as my son was coming along for the second weekend in a row, and so was Colleen. Plus I was trying a new gun that Santa dropped off! The day was unseasonably warm but wet, with a light mist in the air all morning. Our family arrived early and staked a claim on the pistol bay, setting up our target stands and loading magazines as we waited for the others to arrive. There were eight of us total, which made for lot of smoke and noise generation. 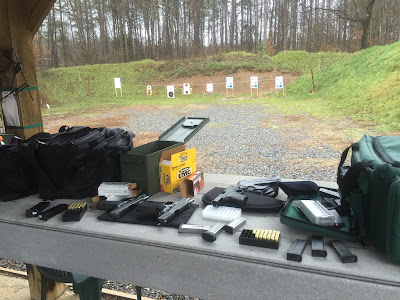 We had a variety of targets and guns to shoot. Everyone was very conscientious of safety and aware of other shooters. Besides all the paper targets, several of us brought shotgun clays which were placed on the berm as reactive targets. They were fun replacements for the now banned steel targets.

After a couple hours of shooting some folks headed for home, while four of us moved over to another range to shoot rifles for a bit. By this time the mist had progressed to a light rain, so we didn't stay long. Our timing was perfect though, as the rain started in force as we drove away from the range.

It was an exceptionally fun morning spent with good friends. We put many rounds down range, and enjoyed a lot of conversation and laughter. There's no small amount of mud to be cleaned out of the car, and time to be spent cleaning guns afterwards, but that's a small price to pay for good times with friends and family.